You know that terrible, uncomfortable moment when you run into an ex on the street, and you have to pretend you’re doing amazing without him or her?

Well, in Thursday’s episode of How to Get Away With Murder, Annalise and Michaela — who were once in their own twisted, messed-up relationship of sorts — spend an entire hour feeling that way, after Annalise’s newest case forces them to cross professional paths. The resulting interactions are so tense, they lead to not one, but two heated exchanges at the Caplan & Gold elevator bank. Two!

But even the characters who don’t come anywhere near Annalise in Thursday’s installment aren’t doing so well. (After all, if they were leading stable lives, they wouldn’t be on this show.) Let’s recap what went down in the latest hour:

WE ARE NEVER, EVER GETTING BACK TOGETHER | In an attempt to scrape together the funds to keep her class-action lawsuit afloat, Annalise begs Soraya Hargrove, Middleton’s president, to let her be a consultant in Soraya’s messy divorce proceedings. The good news: Annalise gets the gig, and Soraya will be writing her a check if she can negotiate a better deal than whatever Soraya’s ex-husband is currently offering. The bad news: Annalise will be acting as co-counsel for Tegan Price, the Caplan & Gold partner that Michaela is currently shadowing. That chill you just felt cut through the air? It came from the icy stares that Michaela and Annalise exchange upon realizing they’ll have to work together again.

Fortunately, Tegan is a self-proclaimed “boss bitch” — a category that Annalise and Michaela also fall into — and once she assembles her team of Lady Avengers, they’re able to successfully negotiate joint custody of Soraya’s children. (It’s amazing what you can get done once you discover your husband was illegally hiding his assets three months before filing for divorce.) But Annalise and Michaela’s unexpected reunion has a major, deeper effect on both women.

For Annalise, the outcome is positive…ish. Even though she makes a massive mistake during the divorce proceedings — accidentally emailing some damning video footage of Soraya to her boss at Middleton — she also has the very “A-ha!” moment that leads Soraya to get joint custody of her kids in the end. Despite Annalise’s missteps and her gutter-dwelling reputation, Tegan makes it clear that she could finagle a permanent job for Annalise at Caplan & Gold, should she ever want it.

Michaela, however, walks away from the reunion with Annalise looking like she could use some quality time with a therapist’s couch. After Tegan offers to get Annalise a job at her firm, Michaela follows her ex-professor to the elevators, telling Annalise she is not allowed to take a position at Caplan & Gold and screw up the great internship Michaela’s got going — or the mentoring she’s getting from Tegan. And that’s when Annalise drops an uncomfortable truth bomb on her former student: “You’re doing it again. Looking for a mommy everywhere you go. Me, Tegan, whatever woman you encounter next — you want us all to be the mother yours never was.” As the elevator doors close on Annalise, Michaela is left to sputter out a few “That’s not true!”s, completely disoriented by Annalise’s realness.

THE WALKING DEAD | Meanwhile, when she’s not getting psychoanalyzed by Annalise, Michaela is trying to figure out how to unlock Tegan’s files so she can dig up something incriminating about Antares. Thus far, she can only access the company email system at Caplan & Gold, which is not helpful.

Laurel, on the other hand, has more success at her internship with Bonnie. While scrolling through a list of donors to D.A. Denver’s attorney general campaign, Laurel spots a familiar name: Trent Stockton. A few episodes back, Laurel had stumbled upon a news article about Trent, who died under “mysterious circumstances” following his employment at Antares. But now, curiously, Trent is alive and donating to Denver’s campaign. (Denver, by the way, finally realizes during this hour that Laurel is acting as Bonnie’s intern, and he is none too pleased to see her rooting around in potentially incriminating files.)

As Laurel dumps all this information onto Michaela, drawing the conclusion that her dad must be paying Denver to cover up for Wes’ murder, Michaela has an idea: Oliver and his insane hacking skills will be Michaela’s key into Tegan’s files on Antares. (Given how many times the Keating clan has used Oliver for illicit activities, I kind of can’t believe she didn’t have this epiphany sooner.) 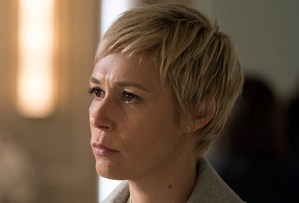 THAT’S NOT MY NAME | While Annalise remains hell-bent on filing her class-action suit, her therapist Isaac makes some observations into his tape recorder: Annalise is a workaholic. She’s “prioritizing rescuing others before her own needs.” She’s filing this lawsuit because she’s fueled by guilt and a desire to drink — and when the lawsuit inevitably fails, Isaac worries that she’ll relapse, or worse.

But Isaac then records an interesting note for himself: When Annalise was asked if her guilt over Wes’ death was motivating her to work so hard, she completely shut down… and “perhaps that’s better for me,” Isaac muses, before saying of Annalise, “The patient is a trigger for me. I need to be mindful.” It’s not immediately clear what feelings Annalise is stirring up inside Isaac — the need for a heroin fix, or something else? — but before Isaac can say anything more, he’s interrupted by a new patient. It’s Bonnie. But for reasons unknown, she’s going by the name Julie Barden when she meets with Isaac for their first appointment.

Actually, she goes by the name Julie Barden for quite a while, if the episode-ending flash-forward is any indication. While Laurel cries over her baby’s unknown whereabouts, and a distressed Michaela sobs in Isaac’s arms, Isaac gets a call from Bonnie but sends it to voicemail. Bonnie, having already visited the crime scene at Annalise’s hotel residence, makes her next pit stop at the Caplan & Gold offices, which is also an active crime scene. When she asks to speak to “the witness,” she’s directed to Tegan Price’s office — and there, just feet away from a pool of blood at Tegan’s door, is Oliver, wrapped in a blanket and looking anxious. Suffice to say, Bonnie didn’t expect to see him there, and her eyes well with tears as she and Oliver look at each other.

FATHER OF MINE | In contrast to all of that, Connor’s subplot of this episode seems positively delightful — even though it could derail his love life completely. When Connor’s dad pays a visit to Middleton, Connor is convinced his old man either wants money or to convince him to re-enroll in law school. Papa Walsh — er, Jeff — maintains he doesn’t want either of those things; he just wants a chance to be there for Connor.

In this case, though, “being there” is a phrase that actually means “sabotaging Connor and Oliver’s relationship.” When Connor and his dad finally get a private moment to talk, Jeff urges Connor to rethink the long-term situation he’s got going with his boyfriend. He insists that Connor is faking his happiness with Oliver, pressing him to “find someone who fits with you, the real you.” Connor initially waves off his dad’s tough love, but when Oliver later suggests visiting Jeff and his partner for Memorial Day Weekend, Connor is clearly still rattled by the conversation.

Also in the episode:

* After crossing paths with him at the D.A.’s office, Annalise tells Nate about her plan to file a class-action lawsuit. She insists she’s doing it for the right reasons; he reminds her, before walking away, that she’s “never been on the right side of anything.” But later, when Bonnie suggests to Nate that Annalise is gunning for the now-vacant chief public defender position, he stays mum about Annalise’s actual long-term plan.

* Knowing that Annalise is strapped for cash, Frank arrives at her doorstep to deliver a whole briefcase full of it — the exact money-filled briefcase that he received for getting Annalise in a car wreck and killing her son all those years ago. Try as he might to get back in Annalise’s good graces, she is having none of it. “All you do is hurt me,” she tells him through tears, after seeing the contents of the briefcase. “Leave!” And leave he does.

* In other Frank news: He and Laurel sleep together! Because when a girl’s got a high libido after ditching her antidepressants, getting freaky with her ex in the driver’s seat of his car is the next natural step.

With that, I turn it over to you. What did you think of Thursday’s latest Murder? Any new theories about what’s going down in that flash-forward? Sound off in the comments!