This week on The CW’s Arrow (now airing Thursdays at 9/8c), while Oliver looks into who is trying to out him as Green Arrow, Dinah Drake has her own mystery to solve — what’s digging at Diggle?

But in the season premiere alone, the new intensity between Black Canary and secret-keeping Spartan has raised a few eyebrows among viewers. TVLine hopped on the phone with Juliana Harkavy, who is now a series regular on the superhero drama, to explore the new Dinah/Diggle dynamic and talk about the love behind the hateful Canary clashes.

TVLINE | I’m surprised you had time for me today. I’ve heard that everyone right now is up to their eyeballs in crossover insanity.
That is true. I was lucky to have a day off, but yeah, it has been crazy.

TVLINE | What has been most fun for you about your first Arrowverse crossover experience?
Probably just getting to see everyone in costume together. You never get to see that many people in that all those different costumes from all those different worlds together. It was a trip — probably more so for the people watching us film [in] downtown [Vancouver], but it was a trip for me too! 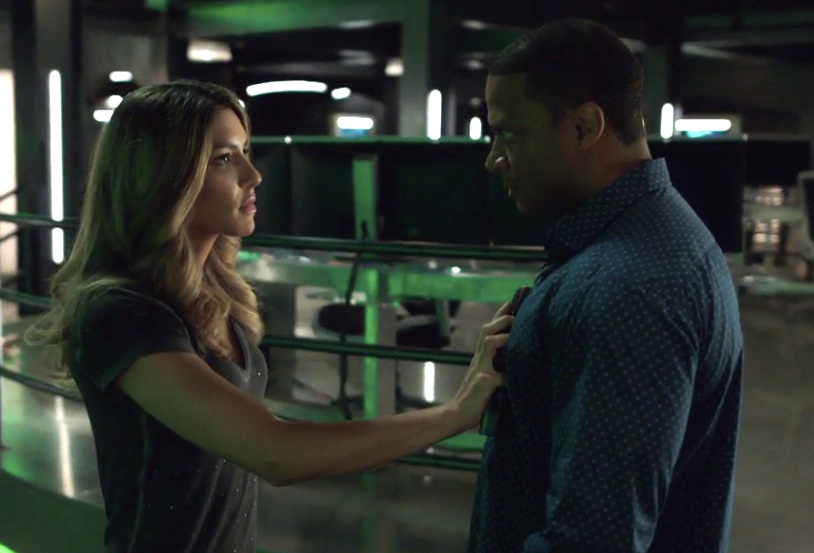 TVLINE | First and foremost, can you clear the air on the vibe we’re now getting off Dinah and Diggle, such as in that scene last week where she thrust his gun at his chest?
I’ve been hearing a lot of rumors about that, seeing people have a lot of theories…. Yeah, Dinah and Diggle are friends. Dinah and Diggle are almost best friends. Or at least for Dinah, Diggle is her best friend, she’s her family. She’s an intense person and she’s pissed [about what he’s hiding], so her intensity shines through even more. Any time you have two actors in an intense space, it could seem like something else, but no, I can assure everyone that Dinah’s intentions toward Diggle are pure — and vice versa.

TVLINE | Will his secret be explored more in this week’s episode?
Definitely. That’s what Dinah does, she’s a detective, and she’s going to get to the bottom of it. She’s going to make that one of her goals.

TVLINE | Will this be something that drives them apart or brings them closer together as colleagues?
You know, I think it could do both. Any time there’s a wedge or a secret put between two people in a group, it’s an obstacle — but there’s also a chance to get over it and become closer.

TVLINE | Along those lines, we now see that Dinah gets to have a say in things. Now that she is more embedded with the team, she has a greater voice.
And that has been great. She definitely has come into the team stronger this season. Because of what she went through on Lian Yu and just the time she spent becoming comfortable as part of the team, her voice is stronger. She’s also accepted the role of Black Canary, whereas last season she was apprehensive. She owns it as her own space now. The louder and stronger her voice is, the more there is for me to work with.

TVLINE | [Co-showrunner] Wendy Mericle told me that Dinah’s new swagger will have “consequences down the road.” Are you aware of to what she was referring?
I actually had a mini panic attack when I read that! [Laughs] Like, “What does she do? What does she do?!” She said it happens around midseason, so I should find out soon. But I can gather what she’s saying — Dinah’s confidence sort of borders on cockiness. She has swagger, she does, and she can piss people off, so… we’ll see!

TVLINE | Are you most excited about your own new costume, or that Rick Gonzales is finally out of his hockey jersey?
I am excited about my new costume. I love that thing, I feel powerful every time I put it on. But I both miss Rick’s old costume — there was a badassness to the simplicity of it — and am obsessed with the new one, too. If you look closely, Maya [Mani] the costume designer actually put a red dog in the chest plate and it’s really, really cool. 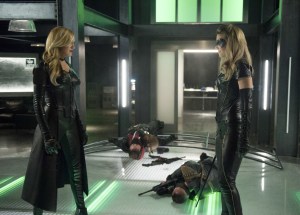 TVLINE | Will “clashing canaries” be a recurring theme throughout the season, as Dinah and Black Siren repeatedly face off? I think we came out of the premiere with two tie scores.
Yeah, they keep getting away from each other! We definitely can look forward to more of that; that battle has not been fully fought yet. I personally love shooting those scenes, Katie [Cassidy] and I have a blast. The funny thing is how much we do love each other, so we’ll fight viciously and then be like, “Oh, you’re hair looks really good!” We’re such girls — and then we go back to battling each other. We’re loving it.

TVLINE | Am I sensing a bit less doubling going on with you in fight scenes?
First of all, my stunt double, Ivett [Gonda], is amazing. She’s an Olympic tai kwan do fighter, so she’s just incredible. Because of that, I’m learning a lot from her about how to kick, and through my actual training with the stunt team. That being said, I definitely want to learn from her so I can do what she does, because I think it takes it to another level when you can do your own stunts. When it’s something that she’s doing I’ll stand to the side and mimic her, and if I want to try it, she’ll show me. As a result, I’ve been able to do a lot more this year, which has been one of my big goals this season.

TVLINE | When I saw Stephen [Amell] at FanFest last month, he had not yet worked with either Kirk Acevedo (playing the Richard Dragon-like Ricardo Diaz) or Michael Emerson (as a mystery villain). At this point now, have you?
[Coyly] They might have stepped in once or twice…. Yeah, I’ve seen them around. Kirk is like an old friend of mine — we did Walking Dead together — so it’s really cool to have him on the set. He is so good, like just his voice… he can say one word and be captivating.