Oliver Queen is “smiling a lot more” in Season 6 of The CW’s Arrow. And so, in turn, is series star Stephen Amell.

Coming off what he recently ranked as his second-favorite season ever (trailing only the freshman run), Amell likes what he is seeing thus far of Season 6, which premieres Oct. 12 on a new night — Thursdays at 9/8c, leading out of Supernatural.

Shortly after regaling the crowd at the NY/NJ Heroes & Villains Fan est (of which he is a co-founder, and where during a panel Q&A he teased another trick arrow and a spoiler-tastic new voiceover), Amell spoke with TVLine about the thrill of the (Adrian) Chase, Season 6’s newfound “maturity” and the new wrinkle awaiting Oliver and Felicity (if, you know, his lady survived that explosive finale).

TVLINE | From the panel, it seems that you obviously hold Season 5 in high regard — and that was a fantastic season. I even had people at work who don’t watch the show but tuned in for the finale saying, “That was a helluva finale.”
I like that. 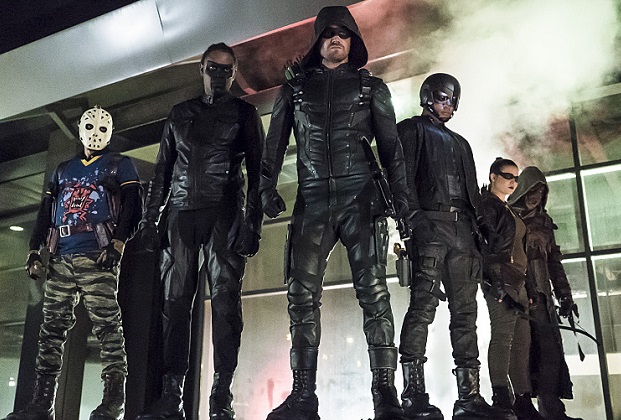 TVLINE | What about Season 5 do you think worked so well?
I think that Season 5 began in earnest with a dinner that [Arrowverse executive producer] Greg Berlanti and I had just after the conclusion of Season 4. We’ve built out a really interesting universe on The CW, and I think that there are things that we [on Arrow] do better than everybody else. Supergirl has a bigger budget for VFX, I think, and it has aliens all the time, and The Flash is super power-laden, and Legends travels through time. We are best when we stay within the limits of Star City.

TVLINE | You’re on the streets.
Yeah, we’re on the streets. I said, “You know, I think that there’s a lot of things that we do well,” and Greg goes, “I would agree,” and I go, “Can we do those things?” Doing a show is like a relationship, right? You get in. It’s hot and heavy. Things are going great. You move in together. And then one partner turns to the other and says, “You know, you haven’t been to the gym in a bit….” That to me was us. If we’re going to do this show, let’s really do it. Let’s be morally ambiguous with the characters and make it more three-dimensional and put killing back on the table, let’s move away from trying to be like everyone else. Let’s focus on being Arrow.

TVLINE | Coming off such a strong season and now that we’re away from the flashback framework the show had been operating with, do you feel that Season 6 is kind of pivotal? That there’s something to prove?
I don’t think that there’s anything to prove. I wouldn’t call having to do the flashbacks a hindrance by any means, but we did have to do them. And that’s nine-ish minutes of screen time per episode that can be devoted to…. At the risk of spoiling what happens, at the end of Season 5 I don’t think that we’ve ever had a deeper roster of talent on the show and a more capable group of actors to build out what’s going on in Star City. So I don’t think we really have anything to prove. I’ve been really impressed [with Season 6]; there’s a really pivotal moment at the end of our second episode and when I saw it I thought to myself, “OK, this is interesting. Are we going to follow through with it?” And we really do. We followed through with it. There’s a maturity there that I’m very proud of. 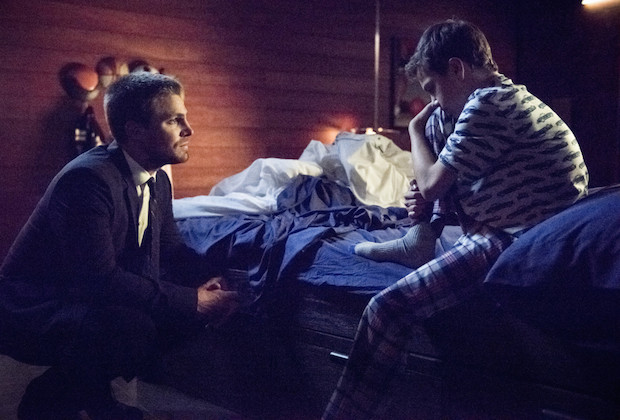 TVLINE | One thing we do know about Season 6 is that William (played by Jack Moore) will be a part of Oliver’s life. Is exploring that paternal side exciting for you as an actor, this new facet of a character that you know so well, or was there somewhat of a concern that “there’s a kid in the mix now”?
First of all, I’d be a little more worried if [Oliver’s son] was like five or six, but we’re playing him as like a sixth or seven grader. Jack has been super equal to the task and it’s just been great. I remember when I read the [premiere] and it was just a bunch of Oliver calling William “Sport.” Like, “Hey, Sport!” And I got [co-showrunner] Wendy Mericle on the phone and she goes, “I know what you’re going to say. I know what you’re going to say. Oliver’s never going to call him Sport. You find what you’re comfortable calling him. It can be what you call your [own] kid, it can be ‘Buddy,’ it doesn’t matter.”

Immediately after that my first full day of work was a full day with Jack, and I was really taken with it — and, you take this with a grain of salt, apparently the studio and the network were really taken with it, too. So I think it’s a really interesting dynamic for Oliver to have to examine. 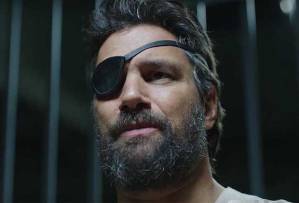 TVLINE | Having Manu Bennett back for the finale was so critical. It gave everything such weight and resonance. How would you characterize the Oliver/Slade relationship moving forward? Frenemies? Something more?
I wouldn’t say frenemies. I think that one of the things we really focus on is that Slade Wilson, throughout the course of the Season 2 flashbacks and what we saw present day, was drugged. He was a character that was under the influence of something. So now we are back, Oliver believes, to the version of Slade that we met in Season 1.

TVLINE | Same goes for Thea (Willa Holland) if she’s alive. She has something to say about that.
Exactly right.

TVLINE | Kirk Acevedo, who has been cast as a version of Richard Dragon, played such a sonuvabitch on Kingdom this past season. How different would you say—
Haven’t seen him and haven’t worked with him yet [as of this Sept. 17 interview]. It’s really interesting this year. There are a number of big-time players that I have yet to have a scene with.

TVLINE | Wendy seemed really excited about — and this is somebody you have worked with — Samanda Watson, the FBI Agent character.
Sydelle Noel (GLOW) has been really, really, really fun to work with.

TVLINE | In what ways is she a unique adversary for Oliver? I mean, people have tried to connect the dots before.
Oliver can’t so much as open his mouth to say boo without her bulls–t detector going off. She is thoroughly and utterly convinced of exactly what he is, and the ironic and funny thing about that is, of course, she’s precisely right. 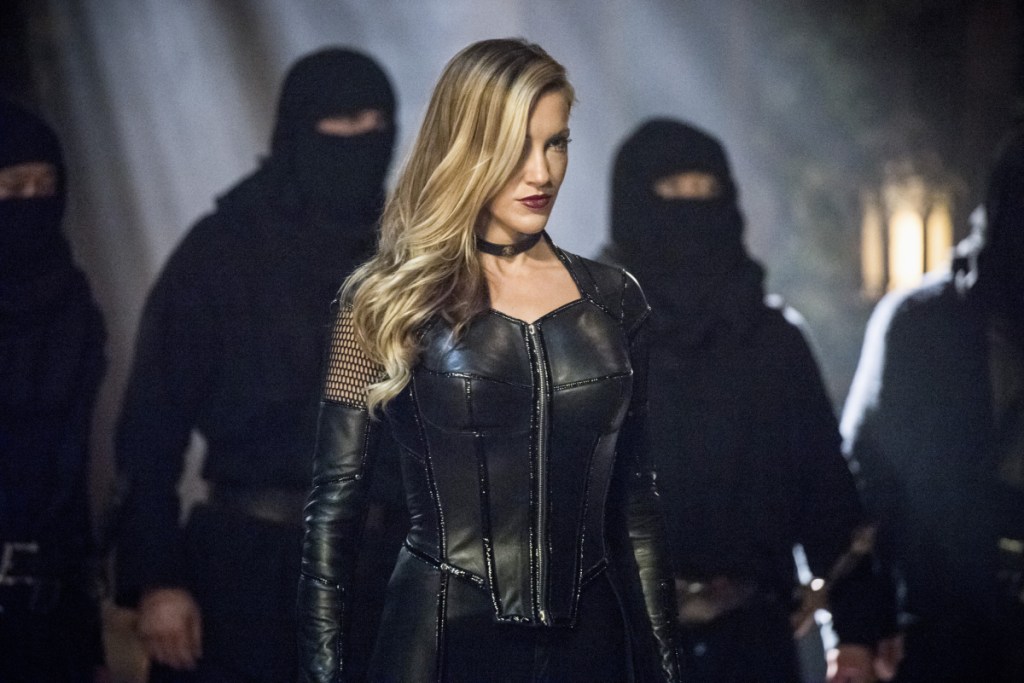 TVLINE | What does Oliver see and feel when he looks at Black Siren (returning series regular Katie Cassidy), and vice versa?
Oliver is, ironically, the most hopeful one despite the fact that she allied herself with Adrian Chase — who had offered to break her out of prison, so I understand where she’s coming from. But the fact is he’s sort of hopeful, “If there’s a bit of Laurel in there, I want to find it.” He’s more empathetic to the struggles for [Quentin] Lance, you know, and anyone that has a history with Laurel. He knows that [Black Siren] is not a good person necessarily, but he hopeful that there’s something in there.

TVLINE | Meanwhile, Oliver to her is nothing.
Nothing.

TVLINE | The team really took its lumps in Season 5. Emerging from the Adrian Chase crucible, is there a kind of a restored confidence?
There is with Oliver. I mean, I bristle at the notion that all of a sudden he’s, like, smiley and happy-go-lucky. But I think that there’s a way to fill Oliver with a little more contentment without domesticating him in the way that we did a bit in Season 4. With a lot of the ways that he approaches things now, he just seems a lot more comfortable in his own skin.

You know, the most transformative moment in my eyes, for Oliver, was before everything happened. He had the opportunity to kill Chase and he simply says, “That’s who I was. That’s not who I am anymore.” And if the underlying issue really was blaming himself for his father’s death and he has forgiven himself, he has absolved himself of that, and that’s led to a lot of brighter days for me this year. 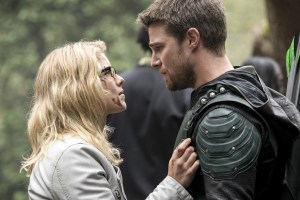 TVLINE | In a scenario where Felicity (Emily Bett Rickards) did survive the Lian Yu explosion, are there new places for her and Oliver to go to in their relationship that we haven’t seen in the first five seasons?
Well yeah, of course, because Oliver’s a package deal now. It’s Oliver and William, right? So yeah, there are definitely places where we can take it.

TVLINE | And lastly, for this year’s crossover how do we one-up aliens?
The thing that I will tell you about the crossover is that for the very first time…. You know, when we first did them it was just Arrow and Flash, it was kind of simple. And even when we did them last year, it was like, “We’re doing an episode of Supergirl, and then an episode of Flash, and then an episode of Arrow, and then an episode of Legends.” This year it is a four-hour movie. The note that I got when I was speaking with one of our producers is, “When you tune in, aside from the opening graphic, stylistically, if you didn’t know what order the shows were in, you shouldn’t be able to tell.” Like, it’s just one through line.