On Night 2 of The Voice’s Season 13 Battles — or, as I like to think of them, cage fights with high notes — Carson Daly collected another paycheck for announcing what was obvious over and over again (“The Battle starts now”), and another half dozen vocalists did their damnedest to outduet one another. As for you and me, I suspect we were all just hoping that a new round of sing-offs would make us forget the head-scratcher that was Night 1’s Steal for Kathrina Feigh but not for the vastly superior Sophia Bollman. If Tuesday’s performances themselves didn’t sufficiently put that travesty behind us, maybe this recap of them will. Here goes nothin’…

Team Jennifer: Davon Fleming (Grade: B-) defeated Maharasyi (Grade: C-) on “I’m Your Baby Tonight” | Even on the first day of rehearsals, it already sounded like Maharasyi was straining to hit notes, whereas the song came so naturally to Davon that, as JHud noticed, he didn’t leave any room for his partner/rival. (Good strategy, whether it was intentional.) On stage, the duet — and our ears — suffered from the fact that the pair’s styles never really gelled. Also, I’m just plain not a fan of Maharasyi’s voice. This wasn’t exactly a tour de force by Davon — his Blind was way better — but it was, from the word go, his to lose.

Team Adam: Hannah Mrozak (Grade: C) defeated Brandon Showell (Grade: B-) on “Cold Water” | Probably not the best sign for this duo that, when their Battle was announced, I couldn’t remember either of their Blind Auditions. In rehearsal, Brandon made more of an impression, but that might well have been because Hannah was so distracted by Joe Jonas’ cuteness. At the moment of truth, Hannah stumbled out of the gate, struggling with her low notes. She improved as she got to let loose, but by then, it was too late — I remembered why I’d forgotten her. Brandon fared better but sounded unpolished, going for runs that came off good but wanted to be great. Overall, noisy and unremarkable. Hannah will never make it to the other side of the Knockouts. 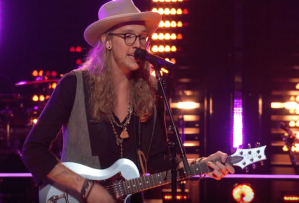 Team Blake: Mitchell Lee (Grade: B) defeated Dennis Drummond (Grade: C) on “Mr. Jones” — Dennis stolen by Adam | Though Dennis probably has the more authentically bluesy voice, he suffered from a bit of mumble-mouth — ironic, since his coach praised his diction in rehearsal — and seemed to really struggle to hit that high note on the chorus. (And whose cruel idea was it to have him, while standing next to pretty-boy Mitchell, sing a song that included the line “Man, I wish I was beautiful”? Mean.) Mitchell didn’t exactly ace the high note himself, but he came closer. And if I closed my eyes, blocking out his cheesiness factor, he actually sounded like a viable pop-country star.

So, who did you think gave the night’s best performance? Vote in the poll below, then hit the comments.