It’s a cliché and a half to say that everything can change during The Voice’s Battles. In fact, if Carson Daly said it, I’m sure I’d roll my eyes. But it’s also, weirdly, true. Last season, I went into the Battles backing Felicia Temple and came out in awe of (eventual winner) Chris Blue. Going into Season 13’s Battles, my money was on… well, you know. However, I wouldn’t be in the slightest surprised if, by the time they were over, I was rooting for a different singer. Did Monday’s kickoff of the Battles, with along for the ride advisers Kelly Rowland (Team Jennifer), Joe Jonas (Team Adam), Rascal Flatts (Team Blake) and Billy Ray Cyrus (Team Miley, of course) sway you/me/us? Let’s review the performances, then we can discuss/debate in the comments.

Team Jennifer: Lucas Holliday (Grade: B+) defeated Meagan McNeal (Grade: B) on “My Prerogative” | This isn’t going to go down in history as one of the greatest duets ever or anything — Donna and Barbra on “No More Tears (Enough Is Enough),” it wasn’t. But man, was it ever fun. Lucas and Meagan not only sounded good, they put on a show with a capital S — something I wouldn’t have guessed Luke the Singing Cashier necessarily had in him. Moreover, he sang with a throaty, growly quality that made his performance stand out from Meagan’s — and made me eager to hear what he’d do with a Joe Cocker song.

Team Miley: Moriah Formica (Grade: A) defeated Shilo Gold (Grade: B-) on “American Woman” | Eesh… going into this Battle, it didn’t seem like it was going to be much of a contest — Moriah went together with the song like rock goes with roll. And when Miley armed the 16-year-old with a guitar… yeah, if I were Shilo, I’d have been nervous, too. Once they hit the stage, they only had to sing a line apiece before I said, weirdly aloud, “It’s over.” Shilo shone here and there, but Moriah, start to finish, freakin’ shredded the song. After they were done, Carson said it was tough choice for Miley, but let’s be real — it wasn’t. 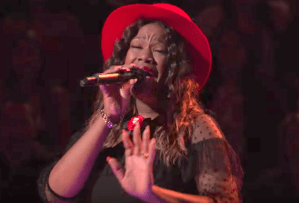 Team Blake: Keisha Renee (Grade: B+) defeated Noah Mac (Grade: B) on “I’m So Lonesome I Could Cry” — Noah stolen by Jennifer | Day 1 of rehearsals, Noah’s voice sorta vanished behind Keisha’s. Day 2, it was coaxed to the forefront… which wasn’t entirely a positive, as he sounded like he’d been right to be unsure whether he could hit the big note that Rascal Flatts encouraged him to try. On stage, however, he sounded lovely, offsetting an appealing vibrato with just a touch of growly-ness. Nonetheless, he was no match for Keisha. Maybe because their voices didn’t really gel on the song, he came off like a singer with potential; she came off like a singer whose potential had been realized.

Team Jennifer: Chris Weaver (Grade: B+) defeated Kathrina Feigh (Grade: C) on “Dangerous Woman” — Kathrina stolen by Blake | Even on the first day of rehearsals, it was looking like Chris was gonna demolish Kathrina — Kelly was ready to throw her pencil at him, no less. On the second day, Kathrina tried to play catch-up but just wound up sounding screechy. In the moment of truth, she made the song her own, which is really just a nice way of saying she often seemed to sing the wrong notes. Meanwhile, Chris sang with a forcefulness that threatened to blow the speakers — and knock Kathrina right off the stage — making her a mystifying steal for Blake. 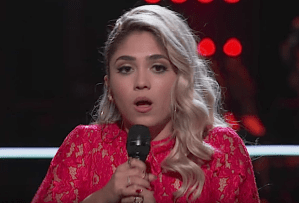 Team Miley: Brooke Simpson (Grade: A-) defeated Sophia Bollman (Grade: A-) on “You’re a Big Girl Now” | In rehearsals, Brooke and Sophia harmonized dreamily but were challenged by their coach to find the big showoff-y moments in the Dylan song. On stage, it was mission accomplished. Their harmonies weren’t as tight as when they’d been singing quietly in rehearsals, but their bring-down-the-house moments were really impressive. Honestly, I’d have to call this Battle a draw. Well-matched competitors at the top of their game. If I had to pick, unlike Miley’s fellow coaches, I’d have gone with Sophia, so I was bummed that she wasn’t stolen.

Team Adam: Adam Pearce (Grade: B+) defeated Whitney Fenimore (Grade: B) on “Stop Draggin’ My Heart Around” — Whitney stolen by Miley | The Stevie Nicks/Tom Petty duet seemed from the get-go like it was going to be a better fit for Adam than Whitney. So when she took the stage, she did so, I thought, at a pivotal disadvantage. In performance, Whitney got to sing first, which was a helpful reminder of how excellent she actually is. When it was Adam’s turn, he sounded pretty fantastic, too, but then, you’d kinda expect him to pull off a solid Petty. Overall, however, the team-up was kind of a mess — they just didn’t sync up, that first chorus harmony ending so far off, it barely qualified as a harmony. Individually, they’re swell. But together? Not so much.

So, who did you think gave the night’s standout performance? Vote in the poll below, then hit the comments. Any coach’s call particularly confound you?