Tuesday’s American Horror Story: Cult began, just as last week’s ended, with a woman at her wit’s end brandishing a firearm — only this time, it wasn’t Ally.

No, this week’s episode took viewers back to June 1968 for the true-crime tale of Valerie Solanas (played by Lena Dunham), an aspiring writer who was sick and tired of being taken advantage of by one Andy Warhol (Evan Peters). “You had too much control over my life,” she told him as he recoiled from her first misfire. “Down with the patriarchy! S–k my d–k, Warhol!”

Cut to present-day Michigan… Meadow’s mass shooting was apparently a rousing success, earning Kai national media coverage as a “brave young man,” 20 more points in the polls, and — best of all — a retweet from Eric Trump! Oh, he also won that seat on the city council he was campaigning for. That’s almost as cool, I guess.

Anyway, Kai’s heightened profile finally earned him the following he’d always wanted, with handsome, corn-fed idiots showing up by the bus-full to dress in blue and put their lives on the line for Kai’s cause. (“People are hearing us and are answering the call!” Kai said of his “volunteers.”) But these new developments weren’t sitting well with Beverly “Motherf–ing” Hope, especially Kai’s decision to pursue law and order instead of breeding more fear. 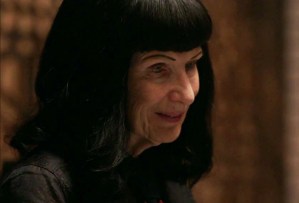 This led Beverly to an ol’ firecracker named Bebe Babbitt (special guest star Frances Conroy!), who criticized the female members of Kai’s cult for letting a man become too powerful. “You ladies really stepped in it,” she began. “History may change, but herstory always repeats itself. … You’ve lost your way, all women have. The male wants desperately to be led by females … but we keep giving away the natural order of things.”

And what are Bebe’s credentials, you ask? She was apparently Valerie’s lover during her rise to power. Valerie’s SCUM Manifesto, one of the original pieces of writing to accuse men of being society’s real problem, earned a cult following of its own back in the day. In fact, Valerie’s cult went on to commit a string of brutal murders for which “some piece of s–t man” would eventually take credit. (Ever heard of a little guy by the name of the Zodiac Killer?)

In the end, Bebe used Valerie’s story as a cautionary tale, convincing Beverly, Ivy and Winter that allowing Kai to take their power will result in their collective demise. The next thing I knew, the three women were cutting Harrison to pieces in the meat locker after forcing him to reveal what actually happened to Meadow. And here’s the real cherry on top: Not only did Beverly score the “exclusive” discovery of Harrison’s corpse, but she also used her report to undermine Kai’s alleged “law and order.”

There’s just one problem with this brewing clash of cults: The episode’s final shot revealed that Kai and Bebe are working together.

* I’m not sure which actress I was more excited to see in Valerie’s cult: AHS fave Jamie Brewer or Glee grad Dot Jones.

* I was fully prepared to goof on Dunham and her Valerie Wig™, but I was actually really impressed with her performance. It was funny and weird in all the right places, and I couldn’t take my eyes off the screen during her final confrontation with Warhol’s ghost.

Your thoughts on this week’s Cult? Dunham’s performance? Conroy’s character? Whatever’s on your mind, drop it in a comment below.