Captain Lorca had to fight for his life this week on Star Trek: Discovery — and he didn’t get much help from a classic Trek character.

Lorca starts out the week on a Starfleet space station, bragging to Admiral Cornwell about all the great things the Discovery has accomplished since they fired up the spore drive. But on a shuttle ride back to his ship, he’s ambushed by Klingons, who kill the pilot and take Lorca hostage. (Seems they’ve heard a bit about this spore drive, too.) They throw Lorca in a prison cell, where he meets… Harry Mudd! Fans of the original Trek series know Mudd as a con artist who uses his wits (and loose morals) to survive. And, as played here by The Office‘s Rainn Wilson… yep, he’s pretty much all of that, and more. 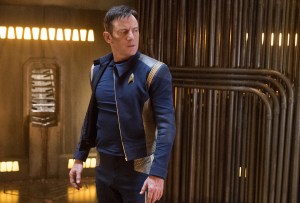 Mudd tells Lorca he’s in here for racking up enormous debts after trying to impress his love Stella by buying her a moon. There’s another Starfleet guy in the cell, too, moaning in the corner, and when a pair of Klingon guards enter and order Mudd to “choose your pain,” he points to the moaner, and the guards beat him senseless, brutally stomping his face in. Mudd explains to Lorca that the Klingons give them an option to either take the beating themselves, or pass it on to one of their cellmates. “You’re gonna want to stick with me,” he tells Lorca. “I’m a survivor. Just like you.”

Lorca finds another Starfleet guy in the cell: Lt. Ash Tyler, who was captured at the Battle of the Binary Stars. (He’s managed to survive by doing, um, favors for the female Klingon captain L’Rell.) He offers Lorca a morsel of food, but a robot spider snatches it away and carries it back to Mudd, who says it’s the least Starfleet can do for him. He had a “respectable business,” but lost it thanks to the Federation-Klingon war. He rants about “Starfleet arrogance” and the dire consequences it has on the little people on the planets below; they “are sick and tired of getting caught in your crossfire,” Mudd declares. Hmmm… Harry Mudd, populist crusader?

The Klingons haul Lorca away and strap him into a torture chair to meet L’Rell — who speaks English quite well, actually. (No subtitles this week!) She wants details on the spore drive, but he just mocks her for sleeping with a human. She knows about his extreme photosensitivity, though, and props his eyes open, Clockwork Orange-style, before shining an agonizingly intense light into them. When Lorca returns to his cell, he throws Mudd’s robot spider against the wall: Mudd’s been using it to transmit information about them back to the Klingons. “When it’s time to choose our pain,” he tells Mudd, “we’re choosing you.” 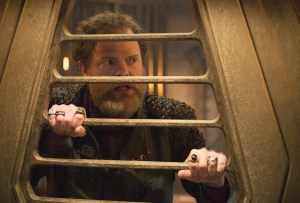 But when the Klingons return for another round of “Choose Your Pain,” Ash volunteers instead. It’s a trap, though: He slides out of the way of the Klingon’s boot, and he and Lorca fight back, snapping the guards’ necks and taking their weapons. Since Mudd betrayed them, they leave him to rot in the cell alone, crying out for his Stella and vowing revenge. Lorca and Ash fight their way out, with Lorca leaving a nasty gash on L’Rell’s face, and hijack a Klingon shuttle to find their way back to the Discovery, which beams them aboard safe and sound.

CREATURE DISCOMFORT | Back on the Discovery, Burnham is still concerned about the effect the spore drive is having on the Tardigrade creature. When Lorca is captured, acting captain Saru calls for multiple spore jumps, but Burnham pushes back, thinking that might kill the Tardigrade. Dr. Culber agrees the creature is deteriorating, and Burnham urges Stamets to find a workaround. He theorizes that if they could transfer Tardigrade DNA into another animate being, that being could take its place in the spore drive. 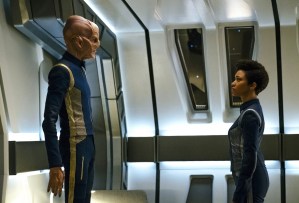 Saru is impatient, though, and orders Stamets to put the Tardigrade back in the spore drive, confining that troublemaker Burnham to her quarters. The ship makes a successful jump, but it devastates the creature, which curls up like a dried mushroom. Saru insists their survival is more important than the Tardigrade’s, and once they get Lorca back onboard, Stamets says they’re cleared to jump, and they zap away to safety. But Stamets actually put himself in the spore drive after a spray of Tardigrade DNA. He’s knocked out by the jump, but seems surprisingly OK after regaining consciousness. We’ve found a solution, then, right?

Well, maybe not: Stamets seems fine, and tells Dr. Culber how “unspeakably beautiful” the things he saw during the jump were. But after he smiles into his bathroom mirror and walks away, his reflection lingers for a moment before walking away. (Wha??? Did the jump create an alternate Stamets?) Plus, a regretful Saru orders Burnham to save the Tardigrade’s life, and she sends it out into space with a jar full of spores, which regenerates the creature before it zaps away. So that option’s gone, too.

* Rainn Wilson was fantastic as Harry Mudd, wasn’t he? I’m so glad he vowed revenge on Lorca, because that means we’ll get more of him in future episodes.

* “Stella” was the name of Harry Mudd’s nagging wife in the TOS episode “I, Mudd.” Even great loves eventually fade, huh?

* This was a quality Saru episode, with him eventually admitting to Burnham he’s angry with her “because of how much you stole from me.” He wanted to be Georgiou’s first officer, but Burnham never moved on to captain her own ship. Burnham assured him Georgiou would be proud of him, and gave him the telescope Georgiou left her last week.

* Man, those horrifying screams in the background on the Klingon prison vessel sure were harrowing.

* Did you recognize some of the names on that list of Starfleet’s most decorated captains? Georgiou, Enterprise‘s Jonathan Archer… and Kirk’s predecessor on the USS Enterprise, Christopher Pike!

* We learned a bit about Lorca’s past when Mudd accused him of being “too good to go down with his ship.” Lorca explains he was captain of the USS Buran, which was attacked by Klingons. He escaped, and blew up his own ship to save his crew from being tortured by Klingons: “Not on my watch.”

* This episode took full advantage of the lack of language restrictions on CBS All Access, with Tilly marveling at Stamets’ DNA transfer plan: “This is so f–king cool.” She stopped herself before Stamets replied: “No, cadet, it is f–king cool.” F-bombs all around!

Got thoughts on this week’s Star Trek: Discovery? Beam down to the comments and share ’em.