“I would say, with kind of remarkable and frightening consistency, that every perfect part I’ve ever cast on a show has come at the eleventh hour,” the Fringe and Sleepy Hollow veteran tells TVLine with a laugh. “It’s always a nail-biter. It’s a weird karmic rule of casting that I don’t fully understand, but it is very consistently true.” 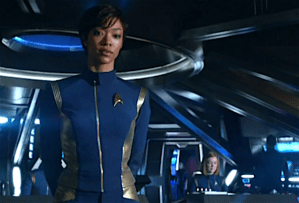 And all that nail-biting paid off, with Sonequa Martin-Green taking the helm as First Officer Michael Burnham — the first African-American woman ever to headline a Trek series. (Discovery airs Sundays at 8:30/7:30c on CBS All Access.) A human raised by Vulcans, with Spock’s father Sarek as her mentor, Burnham has to balance her cold, analytical Vulcan upbringing with her hot-blooded human emotion. Plus, she has to be able to capably handle a phaser in an action scene… but four seasons of playing survivor Sasha on AMC’s The Walking Dead was plenty of preparation for Martin-Green on that front.

Finding the right actor to play Burnham was “a tall order,” Kurtzman confesses. “She has to have this remarkable duality inside of her… highly emotional, but in a way that is contained. She’s struggling between the two parts of herself. Unlike Spock, who is half-human, half-Vulcan, she is all human, but she’s been trained with the kind of Vulcan emotional-suppression ideology, and that is very challenging for her… you can see that wrestling match going on in every moment. That was the single most important thing to define the character, and I think we just had a sense that [Sonequa] intuitively understood it.” 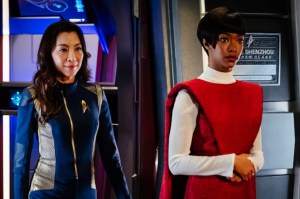 We saw that wrestling match in Episode 2’s opening flashback, when Burnham, fresh out of the Vulcan Science Academy, boarded the Shenzou for the first time and met Captain Georgiou. “She’s much colder” in that scene, Kurtzman says. “In order to live among the Vulcans, she could not express herself in a human way… so when she first steps aboard the Shenzou and meets a captain who’s warm and kind, and humans and other species who are far, far looser than she has been able to be… it’s very jarring for her.” But he also points out “that lovely eye-opening that’s happening for her” by the end of that scene, hinting that “there’s going to be a lot more of that in the series.”

Another aspect that Martin-Green needed to bring to the role: a mastery of Trek‘s dense technical jargon. “It’s a tough thing to learn with actors,” Kurtzman admits. “You either have the ability to roll that off your tongue, or you don’t. And if you don’t, everything kind of trips over itself… And when [Sonequa] read, we all breathed a massive sigh of relief, because she brought an instant authenticity to it. It was very clear that the language was not going to be difficult for her.”

But all of that aside, Kurtzman says he just has an innate sense of whether an actor truly has the goods: “I’m looking between the lines for what the actors are doing when they’re reading. Am I engaging with their face? Am I engaging with their eyes? Do I see a whole emotional life in their eyes?” And Martin-Green checked off every last one of those boxes, he remembers: “It was extremely clear that that’s what was going on with her. So we were very, very lucky.”

What do you think of Sonequa Martin-Green’s performance — and Discovery — so far? Hit the comments with your early thoughts.