The Flash this Tuesday (The CW, 8/7c) turns in one of its funniest episodes, certainly in a long while. But it has even more going for it than that. Here’s a non-spoilery overview of “Mixed Signals,” which was written by Jonathan Butler and Gabriel Garza and directed by Alexandra La Roche (“The Wrath of Savitar”):

IT’S NIFTY
Yes, Barry got a new suit in the Season 4 premiere. But Cisco apparently has been itching to upgrade it even further, and some of the modifications unveiled in “Mixed Signals” are pretty damn cool (if, um, occasionally problematic). The Meta of the Week meanwhile wields a quite formidable power, enough so that it makes any fellow parents out there forget he’s played by the goofy principal from A.N.T. Farm (aka Dominic Burgess of FEUD: Bette and Joan). They also give this “Kilgore” an interestingly detailed backstory — one that raises larger questions about Season 4 moving forward. 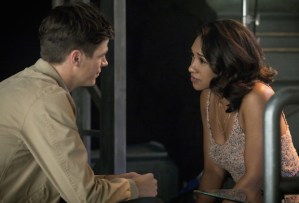 IT GETS SERIOUS
As has been well previewed, Barry and Iris “do the work” when the former’s (conspicuous?) gung-ho, go-getter attitude since returning from the Speed Force prompts Iris to book them some time with a couples counselor (played by Angie‘s Donna Pescow). There, in another moving performance by Candice Patton, Iris eventually bursts forth with what specifically devastated her about her fiance’s disappearing act a half-year ago. And you’ll likely nod along in agreement. 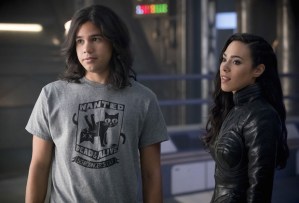 IT GETS EMOTIONAL
I admittedly groaned at first when Gypsy’s arrival for a scheduled date with Cisco kept getting waylaid by his work. But stick with this B-story, because her reason for the rendezvous is surprising, leading to some really nice, subtle work by Carlos Valdes and guest star Jessica Camacho.

DID I MENTION IT’S FUNNY…?
As teased in my Inside Line column, there is a sight gag that is among the superhero series’ very best. (A bit of it is spoiled in a promo that’s out there, but there is so much more to that larger, hilarious sequence.) And as overly-effervescent as Barry’s new demeanor is, it does set the stage for some of his and Cisco’s best, rat-a-tat-tat banter sessions. (If you’re by chance a Silicon Valley fan, you’ll learn that they very much are, too.) Lastly, there’s a fleeting Arrow crossover (of sorts).

Are you relieved to see The Flash return to its lighter form?