Warning: The following contains spoilers for the epic Season 3 finale of Fear the Walking Dead.

Nobody can say that Season 3 of Fear the Walking Dead didn’t go out with a bang. Plenty of bangs, actually. Also, a big boom, a massive splash and enough (potential) casualties to have made the two-parter a series finale. Who (could we be sure) was left standing when the dust settled? Read on…

‘I CUT A DEAL TO SAVE MY FRIENDS’ | In the first episode, “Things Bad Begun,” Troy caught wind of the Proctors’ plan to attack the dam, grabbed Nick and made haste to warn Madison, who was so bummed out about her kids’ abandonment that not even day drinking with Strand could cheer her up. Upon hearing about the impending siege, Efrain revealed that there was enough C-4 in storage to blow the dam and suggested that, rather than let the Proctors take over, they should let the water flow to the people. Nope, replied Daniel. But they should still wire the dam to blow, just in case they had to use that threat as a last-ditch bargaining chip. While Walker and Crazy Dog took off, with plans to go north, as some of the Nation was said to have, Strand revealed to Nick that he’d made a deal with Proctor John: If Victor helped the Proctors sneak into the dam under Daniel’s nose, they’d spare the Clarks. That plan was already going awry, thanks to Nick and Troy ringing alarm bells, but if Nick would just take his mother and go — without telling Daniel, who’d obviously murder Strand — they could still get away.

‘MY BROTHERS HAVE ORDERS TO EXECUTE EVERYONE IN THE ROOM’ | Meanwhile, Alicia and fierce new friend Diana were on their way to the bazaar to sell stuff — not including Alicia’s hair, the teen insisted — when their vehicle was rammed by robbers. The women made it through the ensuing fight like true badasses, but Diana’s leg was so badly hurt that Alicia had to drag her to the bazaar for treatment by doc Eddie. Unfortunately for her, Diana wasn’t Eddie’s only patient. He was also about to perform surgery to remove a tumor from a temporarily wheelchair-bound Proctor John’s spine. How scary was the leader of the Proctors? I will have nightmares about just the way he called Alicia “pretty girl” — that scary. Anyway, he tasked “Alicia from Los Angeles” with keeping him still during the operation — for which he’d be conscious, by the way — or else. Miraculously, not only did she manage to distract him from the pain, but the surgery was a success: Quick as you could say “wiggle your toes,” Proctor John was back on his feet… and taking Alicia with him during the Proctors’ assault on the dam. (Um, yay?) 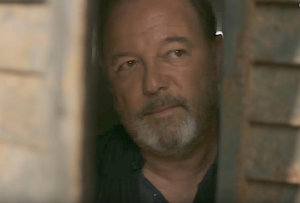 ‘IT WAS JAKE’ | Back at the dam, Daniel, who wasn’t fooled in the slightest by Troy’s fantastic hair, rightly guessed that he’d been the leader of the walker horde whose descent on the Ottos’ ranch had led to Ofelia’s demise. But even under threat of torture, Nick wouldn’t sell out his bro. Instead, Nick lied that, after he’d murdered Jeremiah, a vengeful Jake (RIP) had guided the horde to the ranch. This, curiously, Daniel believed, so he allowed Nick to continue looking for his mom, who was at that very moment off setting dynamite with Troy. When he found Madison, he told her that they needed to vamanos and couldn’t take Daniel, as he’d kill Troy. Why? At that, Troy admitted that he’d led the horde to the ranch to take it away from the Nation. And “I’d do it all again,” he said, adding that so would Madison. At that, she struck him not once but twice with a hammer — seemingly fatally — at last doing what she should have a looong time ago. Elsewhere, as the Proctors arrived at the dam, Strand pulled a gun on Daniel and Lola, shooting the former in the face during a scuffle. After the baddies killed Efrain, Strand told Proctor John that the water queen and her general were dead, then snuck off, took the detonator from Nick and, since his deal to assure their safety was kaput, hid the junkie and his mother.

‘THIS WAS MEANT TO BE A KNIFE THROUGH BUTTER’ | Throughout Episode 2, “Sleigh Ride,” Madison kept having fantasies about picture-perfect Christmases with not only the living but the dead (Jeremiah, Jake, Troy, etc.), fantasies that always devolved into nightmares (one of which included a grave for Alicia, another of which landed Jeremiah’s head on a serving platter). But honestly, even those nightmares were better than her reality, in which Nick bet that she’d kill him like she had Troy if she “had to,” and Strand informed her that Alicia had arrived with Proctor John. Speaking of whom, he guessed that “Alicia from Los Angeles” knew Strand and asked how. Rather than lie, she admitted that Strand had helped her family and, when prompted, disclosed the name of her mother — the same woman whose safety Victor had bargained for. To continue to ensure Madison’s safety, Alicia agreed to sail with Proctor John to Houston. 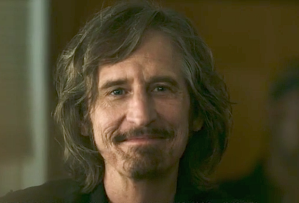 ‘WHAT FRESH HELL IS THIS?’ | After leaving an injured Daniel in a tunnel, Lola went in search of Efrain and found, of course, only his corpse. (At least he wasn’t a zombie.) In a rage, she set off to kill Proctor John and as many of the Proctors as she could… which was especially awful timing for Strand, who was by then trying to sneak Nick and Madison past a bunch of Proctors murdering the water queen’s employees atop the dam. John was, naturally, furious when she opened fire. Strand had said she was dead, and then she “springs up like whack-a-mole.” (She certainly wasn’t going to spring up again after he shot her in the head.) While John was questioning Madison, Nick and Strand, his fellow Proctors recognized Nick since he’d been with Troy at the bazaar. Where’s he? “My mom killed him,” Nick said, prompting Proctor John to remark, “What a perverse family you have, Alicia from Los Angeles.”

‘THE BRAVADO OF THE JUNKIE CHRIST’ | Sick of the lot of ’em, Proctor John decided to kill Alicia, then Nick, making Madison “bear witness.” Not so fast, said Strand. If they were harmed, he’d blow the dam. Only he couldn’t, because when Nick had hugged him goodbye, he’d pickpocketed the detonator! His plan: Send Madison, Alicia and Strand across the lake on a zodiac. Nick would stay behind, since the detonator only worked within a limited range. And that was fine by him. As he put it, “I’m not negotiating… This is my suicide note.” Meanwhile, Daniel, half his face blown off, was still able to knock out two Proctors and take their weapons. After coming across Lola’s body, and sweetly leaving with it Ofelia’s crucifix, he headed for where the action was. For a moment, it looked like Nick’s plan was being foiled. When the zodiac stalled — with Madison, Alicia and Strand still too near the dam for Nick to safely blow it up — the Proctors moved to take away the detonator. Only before they could, someone opened fire, sending brains flying. Who? What? It was Walker, taking advantage of Crazy Dog’s amazing sharpshooter skills to help from a distance. 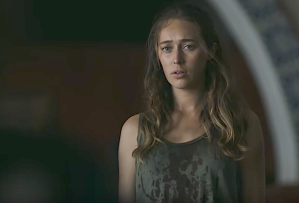 ‘I’M BORED… KILL HIM’ | “New wrinkle,” said Proctor John, only marginally fazed by the development. At last he gave the order to kill Nick. Yet again, before his men could do so, Crazy Dog opened fire. In the ensuing chaos, Daniel made his way to Nick, and Nick decided that the zodiac, once more operational, had gotten far enough away for him to safely blow the dam. Kaboom! At that point, Walker and Crazy Dog really did set off for the north. As for Madison, Alicia and Strand, it didn’t look so hot for them. They seemed to get sucked into the flood. Off one last fantasy — this one involving Jeremiah reaching out of his grave to pull Madison under and Travis attempting to pull her back out — Maddie awakened underwater and made it back to solid ground. But there was no sign of Alicia or Strand, and given the way the dam had begun to crumble when last we saw it, there was no telling whether Nick and Daniel had survived, either.

So, was that finale big enough for ya? Who do you think, of those unaccounted for, will live to see Season 4? Grade the episodes in the poll below, then hit the comments.