It’s a no-brainer: “Ambivalent,” Grey’s Anatomy leading lady Caterina Scorsone tells TVLine, is the word that best describes Amelia’s feelings about the life-altering surgery she undergoes in Thursday’s “Ain’t That a Kick in the Head” (8/7c, ABC). “On one hand, it’s terrifying. Somebody’s going to be cutting into her brain to remove the tumor, and though she’s a fantastic brain surgeon, it isn’t going to be her. 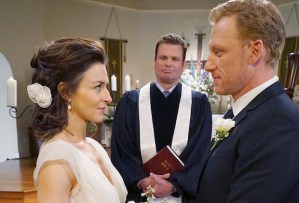 “On the other,” she continues, “there’s some degree of relief that they have found the source of the problem. So much of her behavior over the last season or two has been so erratic. She’d do something kind of wild and crazy and not really know why she did it. Even running away from [her and Owen’s] wedding… Yes, it could have been cold feet, but it was so sudden, so extreme, and then she came right back, and there was no discernible reason for it other than a spike of adrenaline, which essentially this storyline is explaining. She was having kind of chemical events happening inside her that informed her behavior.”

Now that Amelia knows the reason for at least some of the volatility that torpedoed her marriage, perhaps she and Owen can get it back on track. Certainly, that crosses her mind. “They got married very recently,” notes Scorsone, “and definitely, the tumor has implications for that period of her life — their romantic time together and all of the chaos of their marriage. So they definitely have to sort through how they want to go forward.”

Amelia herself will have some sorting-though to do, too. Among the questions that she has to ask, says her portrayer, is, without the tumor, “Is it possible that some of the aspects of her personality that she’s the most ashamed of or struggles with the most could be alleviated? I think yeah, there must be some hope.”

At the same time, the tumor will not erase Amelia. “We had some long discussions about this,” the actress says, “because we wanted to be very clear that the tumor was affecting her decision-making, her levels of adrenaline and her evaluation of risk. But the tumor is not Amelia. It did not create her personality.

“She even jokes about it a little bit,” she adds with a laugh, cracking “that she is greater than the sum of her tumorous parts.”