The Girl of Steel was feeling pretty down on herself atop Monday’s Supergirl premiere, with only daydreams of Mon-El and her mother — literally underscored by a song called “Daydreaming” — as an escape from her heartache and guilt. And no amount of tough love from Alex (“Your pity party has gone uninterrupted!”) or desperate pleas from Lena (“I miss you!”) could snap Kara out of her super-funk.

Kara’s rage against her own humanity even extended to her professional responsibilities; after a heated exchange with James, she decided, “Maybe being a reporter isn’t a good idea. I have important things to do, but not here at CatCo. … I quit!”

She eventually powered through her pain via the magic of an emotional montage, though not before squaring off against a new baddie: evil real estate mogul Morgan Edge (played by Adrian Pasdar). With an equally nefarious fella named Bloodsport by his side, Edge launched an undersea assault on the dedication of a Supergirl statue, torpedo-ing Kara in the process. 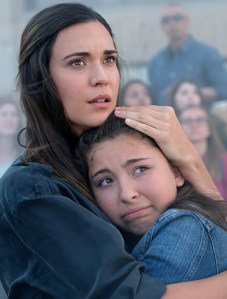 Edge’s attack also introduced us to Sam (played by new series regular Odette Annable), who surprised herself by lifting a giant steal beam off her daughter — but I’m thinking she’ll be even more surprised to learn that she’s actually Reign, the grown-up version of the alien baby we saw rocketing to Earth in the Season 2 finale. By digging up the ground in National City, Edge inadvertently uncovered Reign’s ship, thereby activating her dormant powers. (My only question: Why did she have a scary dream about Kara’s mother?)

Kara may not have been able to prove Edge’s connection to the attacks, but Lena was able to block him from purchasing CatCo — by purchasing it herself! — so at least the good guys mostly won in the end.

* Even though Alex and Maggie’s nuptials are practically destined to go down in flames, I’m still excited for the “biggest, gayest wedding National City has ever seen.” (And don’t even try to act like you didn’t tear up when Alex asked J’onn to walk her down the aisle!)

* Speaking of J’onn, I appreciated his little side conversation with “General Lane.” It’s nice to see Supergirl keeping that family alive… even if Lucy never returns to National City.

* Maybe I’m an idiot, but didn’t Kara work for a daily newspaper when last we saw her at CatCo? What was James talking about when he said they’re “about a week away from locking up this issue”? Does he actually know how to run… whatever he’s running?

* That opening chase scene looked really cool and expensive. And I love the new title sequence!

* Lastly, we need to talk about Press Secretary Cat Grant‘s response to the reporter who asked if President Marsdin believes in global warming: “Yes, Carl. As a matter of fact, she does. She also believes that two plus two equals four and that the earth is round, because the president is not a moron. Any third grader knows that global warming is the biggest threat of our time, and I’m happy to report that the intellectual capacity of our president is not inferior to that of an eight-year-old.” (Sucks to be Carl right now.)

Your thoughts on Supergirl‘s emotional return? Grade the season premiere below, then drop a comment with your full review.