The breakneck two-minute promo — unveiled at the beginning of Sunday’s X-Files panel and embedded above for your viewing pleasure — offers the first footage from the latest revival (aka Season 11) and, as we suspected/hoped, the 10-episode run appears to center largely on Mulder and Scully’s “very special” (and potentially dangerous) son William.

“You have to find him and you have to stop him before he releases hell on Earth,” Scully desperately whispers to Mulder near the end of the video (and we have to assume she’s referring to their MIA son).

William’s impact on Season 11 was foreshadowed at the conclusion of the 2016 revival, with the kid getting name-checked as a possible savior for his dying pop in the finale’s final moments. (Curiously, per the trailer, Scully is now the one hovering near death when the action picks up.)

Other takeaways from the sneak peek: 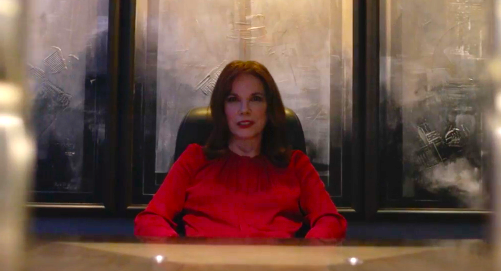 Some highlights from the Q&A…

* Carter said that Season 11 will consist of “eight standalone episodes, and two mythology episodes.” Glen Morgan and James Wong, who penned the classic hour “Home,” are writing the eighth installment, which is “similarly messed up” in tone.

* Carter teased that Scully and Mulder will get “kissing close” at some point this season. But when we pick up, they’re still “professional partners, not romantic partners.”

* Remarking on Langley’s return, Carter would only say “that Langley is in the show this season,” but would not confirm whether or not he is alive or a hallucination.

* On Scully and Mulder’s son William playing a pivotal role in these new episodes, Carter said, “We explore that father-son-mother relationship, and you’ll see more of William than you’ve seen in a long time.” Pileggi chimed in, adding, “I think [the William storyline] is… brilliant. I think it’s done really well, and you guys are going to be very, very happy with it.”

* Pileggi said that “you’re getting more [Skinner] than you did in the last six [episodes].” Carter followed up, revealing that viewers will see a young Walter Skinner as one upcoming installment explores the character’s backstory.

* Carter also let slip that Season 11 will begin with “some background on the Cigarette Smoking Man.”

Press PLAY above and then hit the comments with your snappy judgements about X-Files 2018!