Can you really trust a demon whose sole purpose is to torture you for eternity? That’s the dilemma facing Eleanor and company this week on The Good Place.

We pick up where we left off, with Michael asking the gang to team up with him. Eleanor’s instantly suspicious of his offer, and can sense that Michael needs them more than they need him. Michael warns them that the clock is ticking: Vicky is rebooting the town in 30 minutes… but Michael offers to not erase their memories this time, so they can continue their ethics lessons (and friendships) in secret. 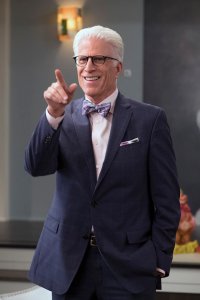 Eleanor calls a “human meeting” to see what the rest of the gang is thinking. Jason says he trusts Michael, because he trusts guys who wear bow ties. (Eleanor slaps the lollipop right out of his mouth for that bit of stupidity.) Eleanor is convinced Michael’s request is a trick, but Chidi wants to know more, so they pepper Michael with questions. No, he admits, they really can’t trust him. They’re currently on Attempt 802 of Michael’s plan, he says, and the current one has only lasted seven days. The Medium Place is real, as is Mindy St. Claire. (We also learn Michael stole Janet from the Good Place, and she gets increased abilities every time she’s rebooted.)

They’re running out of time, Michael reminds them, and he’s really their only option. Eleanor refuses to believe that, but Michael dangles something else in front of her to sweeten the deal: He can get them into the real Good Place, he claims. It’d be complicated, and he’d have to do it in secret, but he thinks he could swing it — and earn himself a spot there, while he’s at it. Chidi’s ready to say yes, which leaves Eleanor and Tahani as the only holdouts. 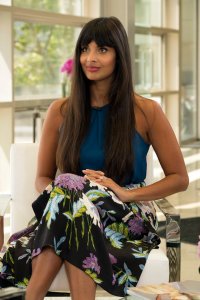 Tahani pulls Michael aside, still convinced (deluded?) that there’s been a mistake and she really belongs in the Good Place. To prove her wrong, Michael shows her how she died: Insanely jealous of her more accomplished sister Kamilah — who was being inducted into the Rock & Roll Hall of Fame just six months after releasing her debut album — Tahani crashed her Hall of Fame induction party and tried to yank down a golden statue of Kamilah… but only succeeded in pulling it down on herself, with it crushing her. This forces Tahani to finally acknowledge her vast self-involvement; she’s onboard with Michael’s plan. Which means it’s now everyone against Eleanor.

While they all bicker, Michael chuckles to himself. “I’m basically an exterminator, and you’re cockroaches,” he laughs, and now he’s forced to team up with the roaches in order to survive. Eleanor doesn’t love that metaphor: She asks for a moment to herself to think, and summons Janet to fetch her a train full of cocaine, with plans to join Mindy in the Medium Place. Chidi catches her sneaking out, though, and tries to convince her she should stay. But they’ve only known each other a week, Eleanor says. She invites him to come with her, but he just wishes her good luck. (Oh no… is the end of “Eleanidi”? That’s my nickname for Eleanor and Chidi, by the way. Or should it be “Chideanor”?) 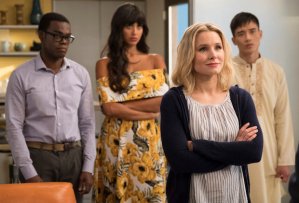 But Chidi’s plea is enough to send Eleanor back to Michael, who tells her that in all eight hundred attempts, Chidi has always stuck by her side, in spite of her incredible selfishness. (Eleanor: “I’m not that selfish.” Janet, suddenly popping up: “Eleanor, your cocaine and escape train are ready.”) Eleanor finally tells the rest of the gang she’s ready to help Michael, “because that’s what Chidi would do.” (Aw, Eleanidi!) She has one condition, though: Michael needs to take ethics lessons from Chidi along with them.

And so “Team Cockroach” is formed: After yet another reboot, Michael defers to Vicky, who wears the “Best Person” sash to the town’s orientation and grabs a microphone to sing “I Will Survive.” But Eleanor and the gang’s memories are still intact, and Michael secretly feeds them information about how Vicky plans to torture them: Eleanor’s supposed to get drunk at the welcome party and throw around insults, which will form the basis of the chaos to come. Janet assures them she won’t rat them out, and they all share a celebratory fro-yo together. Goooo, Cockroaches!

* Michael warning that they’ll all be “in hot water” if Shawn finds out: “Literally. They will boil us. We will be the main ingredient in a chowder of pain.”

* Tahani remembering she was in a very similar predicament once, “except in that instance, Michael was Javier Bardem, and the Bad Place was Vanessa Redgrave’s panic room.”

* Jason asking Michael if the Jacksonville Jaguars will ever win the Super Bowl (Michael: “I can’t predict the future… but no, they won’t”), then Eleanor getting Janet to distract him with a sparkler.

* Janet demonstrating her reboot-heightened abilities by patting her head and rubbing her belly at the same time.

* Eleanor mocking Chidi’s uncharacteristically quick decision about Michael: “You take a half-hour to pick out a turtleneck, and this, you’re sure about?”

* Tahani’s initial reaction to her death at the Rock & Roll Hall of Fame: “Oh no… I died in Cleveland?!”

Got thoughts on tonight’s The Good Place? (Or on “Eleanidi” vs. “Chideanor”?) Drop ’em in a comment below.