Michael is determined to make Eleanor and her friends’ afterlives in The Good Place a living hell… but looks like it might be the other way around.

Michael starts off Attempt #3 at his “faux Good Place” plan feeling confident, hoping they’ll hang his portrait in the Bad Place Hall of Fame “right next to the guy who invented bees with teeth.” But things go south quickly, and he’s forced to move onto Attempt #4. And Attempt #11. And Attempt #291. The first ten minutes of this week’s episode are a deliriously funny rush of quick cuts, as Michael keeps restarting the torture, with minor tweaks, and Eleanor keeps figuring it out. (I have to go back and watch a few more times to catch all the jokes — like the new restaurant called Hot Dog on a Stick… on a Stick.)

No matter what Michael throws at them, the core four of Eleanor, Chidi, Tahani and Jason somehow keep finding each other and ruining Michael’s evil plan. And with every failure, Michael grows progressively more dejected, developing a sizable gut thanks to all the stress-eating. Plus, Real Eleanor — I’m just calling her that from now on, since her name changes with every reboot — informs him that she and the other demons are going on strike until Michael meets their demands. 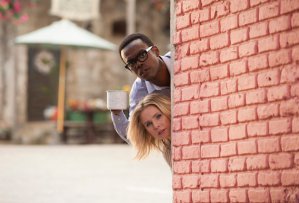 During a stop at the town’s clam-chowder fountain (gross), Eleanor and Chidi overhear a couple of Bad Placers complaining about Michael’s plan… and see them joined by a terrifying fire monster named Todd. Suddenly, they realize they’re in the Bad Place — and Michael doesn’t know they know. They summon Janet, and ask her if there’s any way they can leave this neighborhood. She puts them on a train to Mindy St. Claire’s house in the Medium Place. And it’s not the first time: “You’ve been here 15 times already,” Mindy informs them. (She’s also hoping they brought cocaine: “Mama needs her medicine.”)

Eleanor considers just staying there, but Mindy tells them they always end up going back. She shows them the 14 other plans they’ve tried already, from physically attacking Michael to “catch that magic panda, use her powers.” (Yeah, that was Jason’s.) And though Eleanor and Chidi keep bickering, Mindy’s seen that before, too. “You got it bad for each other,” she tells Eleanor, showing her a video of a post-coital Eleanor and Chidi confessing their love to each other. (Mindy filmed the video through her “lookin’ hole.”) Eleanor grabs the tape and orders Chidi and Janet back on the train. 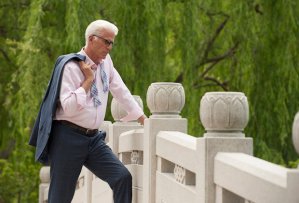 Michael tries to convince Real Eleanor to get onboard with his plan, but she’s had it: She wants to build her own neighborhood next time. See, she’s been taking notes on all of Michael’s failures, and threatens to rat him out to Shawn. A depressed Michael is reduced to asking Jason for advice, who tells him a pointless story about the demise of his Jacksonville dance crew. But it helps Michael realize he needs his own crew, so when Eleanor and the gang confront him for the umpteenth time, he just gives in, telling them he wants to team up with them: “New best friends?”

* Eleanor’s soulmate Sebastian trying to seduce her with “a three-hour spoken-word jazz opera.” (With Michael, Janet and Real Eleanor in the band!)

* The procession of new soulmates for Eleanor, from Tahani to a golden retriever.

* The time when Jason — Jason! — is the one to figure out they’re in the Bad Place. (“This is a real low point,” Michael groans.)

* Eleanor reciting sage advice from her mom: “If a cop handcuffs you to a bike rack, there’s always something you can gnaw through.”

Got thoughts on tonight’s The Good Place? Drop ’em in a comment below.