Imitation may be the highest form of flattery, but on Project Runway, it’s also the biggest source of drama.

Following Shawn’s controversial forfeit on Thursday’s episode, the nine remaining designers were tasked with creating patterns to use in ensembles for the friends and family members of the show’s crew. In addition to banking $25,000, the winner would also have their pattern featured on a line of Dixie Cups. (You know, so you can look fly as hell when you’re rinsing your mouth out before bed.)

Without her sister around, Claire kind of came off like an even crazier person, whining to her client about missing Shawn and talking out loud to absolutely no one. To be honest, I was starting to worry about her.

But no one was more focused on Claire’s workroom behavior than Margarita, who swore that the surviving twin was straight-up copying the look she presented last week. And she made sure to tell each and every person, whether they cared or not. (Most didn’t. Amy even called the situation “subjective,” with Ayana concluding, “We all do ruching at some point.”)

Regardless, the mere suspicion of Claire stealing her look was enough to completely throw Margarita off her game. And the proof was in her questionable runway garment, for which she apologized — and cried — in front of the judges: 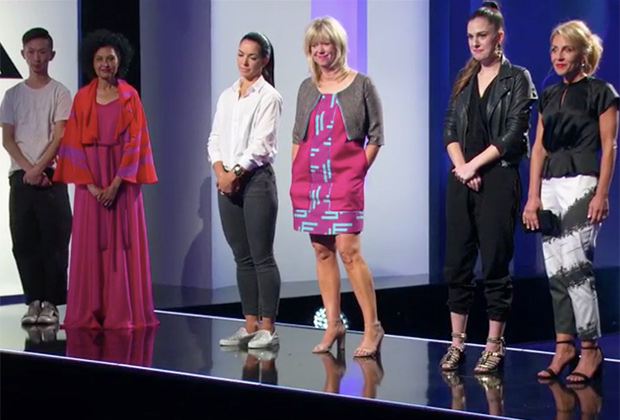 (Real talk: I didn’t think Margarita’s look was that bad, especially considering it was a “Make it work!”™ situation. I also completely forgot she had immunity… and that immunity was even a thing on the show.)

In a dramatic twist, Claire — who narrowly escaped the episode’s first elimination — was named the winner of this week’s challenge, and rightfully so. Like Zac Posen said, it wasn’t the most original look, but it was chic, it was what her client wanted, and it would look really cool on a Dixie Cup, damn it!

In an even more dramatic twist, Michael reacted to Claire’s win by storming off the stage in a huff. “I came to play fair, and there’s no fairness in this game,” Michael told some guy backstage before fake-apologizing to Tim Gunn for making a scene. Per his confessional earlier in the episode, Michael was “annoyed” by Claire’s “original” pants because he thought they were too similar to a pair she already had in her room.)

The question is: Like Margarita’s paranoia about Claire copying her top, is Michael’s complaint also much ado about nothing? Or does Claire deserve some sort of punishment? Drop a comment with your thoughts below.