You already knew that The Mayor had our vote for Most Charming New Fall Series. Now it’s your turn to grade the comedy, which ABC officially premiered Tuesday. But before we get to the poll, let’s fast-forward once more through the pilot, reviewing the developments that set up the show.

As the episode began, wannabe rap star Courtney Rose (The Search Party’s Brandon Micheal Hall) was running for mayor of his California hometown in hopes of removing the “wannabe” from “wannabe rap star.” Unfortunately, though his campaign was being backed by “generous donors” such as Mastercard, Discover and “Yeeza,” his name was far from a household one. “Wasn’t she in Bachelor in Paradise?” asked a constituent on the local news.

However, brand recognition ceased to be a problem after a debate with rival candidate Ed Gunt (David Spade). When the longtime politician said that he was proud of his efforts to restore the City Commons, Courtney, knowing that the park was a dump, whipped out his cell phone to literally call bulls—. “It’s so much trash,” he cracked, “Bravo gave it a second season.” 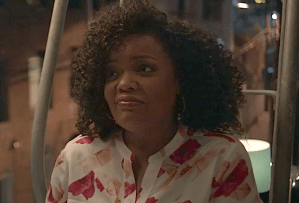 After that winning performance, Courtney was delighted that his mix tape was starting to get attention. Everything, he thought, was going according to plan. Except for one thing: To his horror, he was actually elected mayor. After he declared his intention to march into City Hall the next day and take a hard pass on the job, mom Dina (Yvette Nicole Brown) gave him a loving but stern talking-to. What did he do in his raps? she asked, then answered for him. “You critique the status quo. Maybe now you can actually change it.”

Held accountable for his decision to run for office, Courtney went to bed planning to give being mayor his best shot. And, it turned out, he wouldn’t have to do it alone. When he woke up, in his room was his onetime high-school lab/sparring partner — and Gunt’s ex-campaign manager — Valentina Barella (Lea Michele). She thought he was a “know-nothing egomaniac” but still had “something special — me” as chief of staff.

Once Courtney threw out Valentina’s method of getting down to business — “No revolution in history,” he said, “has ever started with the words ‘index cards'” — he and besties/staffers Jermaine (Bernard David Jones) and T.K. (Marcel Spears) started planning a party to clean up the commons. And, since he even remembered to get the needed permit, Valentina had to admit the event was a great success. “Anything is possible,” he told the crowd, “if you load people up on cheap beer.”

But, before the night was over, Courtney got a call from the booker at the 8:30 Club to open for Mac Etcetra (Hamilton Tony winner Daveed Diggs, a Mayor EP) and took off. In his — and the permit’s — absence, the cops showed up at the City Commons and not only shut down the party but arrested Dina. 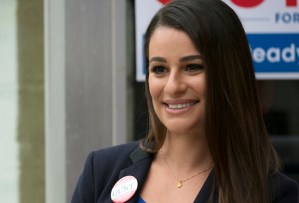 As you’d expect, when Courtney showed up at the jailhouse, his mom and friends called him way the hell out. Dina seemed to make the biggest impression, though, when she gently but firmly drove home the point that his decisions, his successes and failures, were no longer just about him — they were about everyone who believed in him.

So it was a shock when the following day Courtney was MIA at City Hall. Valentina’s reaction to the disappearing act was “indifference with subtle notes of disdain,” but she still joined Jermaine and T.K. in the search for the mayor… and was gratified to find him at the commons, having finished the clean-up (mostly) by himself. Looked like it was going to be a fun four years… till reelection.

So, what did you think of The Mayor? Cast your “vote” below, then hit the comments.