The broadcast networks have nearly 20 shows debuting this fall, including David Boreanaz’s SEAL drama, the adventures of Fox’s Gifted mutants and The  CW’s soapy new Dynasty. To help you prep for it all, TVLine is offering First Impressions of the not-for-review pilots.

THE COMPETITION | NBC’s This Is Us, CBS’ Bull, Fox’s Brooklyn Nine-Nine and The CW’s Legends of Tomorrow

THE SET-UP | Now this is the story all about how a struggling young rapper runs for mayor of his California hometown as a brazen PR stunt — and ends up winning.

RELATEDFall TV Poll: Which New Shows Are YOU Most Looking Forward To?

THE FIRST IMPRESSION | In a word, The Mayor is charming, pairing a super-likeable cast with a fun and instantly engaging premise that it wastes little time diving into (the election results come in by the eight-minute mark).

Playing the titular Courtney Rose, Hall has you rooting for him from go (even when he royally screws up), while Brown is perfect as the unexpected politician’s mom, delivering an early pep talk 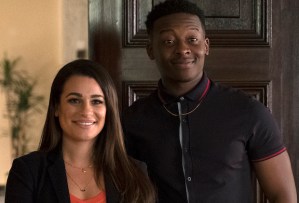 that is remarkably moving for someone we met one scene ago. As Valentina, Courtney’s onetime classmate-turned-chief of staff, Michele finds a nicely modulated version of peppy know-it-all Rachel Berry, resulting in a warm chemistry even when they bicker. Jones and Spears form a winning tag team as Courtney’s best buds, though the latter occasionally risks delivering the sliiiiightest imitation of Titus Andromedon.

THE TVLINE BOTTOM LINE | Ouch, if only we could veto that time slot, where it will face TV’s No. 2-rated (This Is Us) and third most-watched (Bull) scripted programs, vie with the excellent Brooklyn Nine-Nine on the sitcom front, and all whilst bringing up the rear of ABC’s rejiggered Tuesday comedy block. Turnout for The Mayor might all come down to what sort of table a relocated black-ish sets as its lead-in.

Watch a trailer for The Mayor, then vote in our poll below.