“As much as I love the Fourth of July, shouldn’t the real independence day be the real day everybody was free?” Dre reasons in black-ish‘s Season 4 premiere. Then, with an argument that’s pretty hard to refute, the ABC comedy points out exactly how much black people have done for the United States of America — and how little acknowledgement they’ve received in return.

After stewing in the audience at Jack and Diane’s school play — a dramatic, sanitized retelling of Columbus’ arrival in America — Dre makes a scene that brings the production to a halt. “I can’t believe you would honor a slavetrader like Columbus” and not celebrate Juneteenth, he says, acting like the anniversary of the 1865 day all American slaves were finally free is a hallowed holiday in the Johnson household. (Spoiler alert: It’s not.)

Dre continues to fume at work the next day, enlisting visiting recording artist Aloe Blacc as he educates the firm’s white employees about the end of slavery. Then there’s a School House Rock-style animated song by The Roots (it’s great), but it does little to sway Mr. Stevens & Co.’s hearts and/or minds. They argue that black people already have Martin Luther King Jr. Day and Black History Month, which rightfully angers Dre even more. “This is insane. You don’t tell white people or Jewish people that they only deserve one holiday,” he counters. 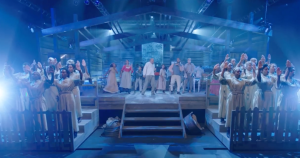 Dre’s indignation then leads to some fully staged, Hamilton-influenced musical interludes in which the main cast play slaves in the pre- and later newly post-slavery south. There’s choreography! There’s a choir! There’s Ruby doing a high kick! Dre closes his argument by noting that “You can never put a number on the amount of wealth we created for this country,” but Aloe Blacc adds that the figure is roughly $300 billion. Still, even with the musical assist, Dre hasn’t swayed any of his colleagues.

At home, Bow points out that talking about slavery makes white people uncomfortable, so of course Dre’s co-workers were less than willing to engage. And Dre sadly points out that the country’s acknowledgement of Juneteenth wouldn’t be a cure-all, but it would at least feel like an apology for everything black people have had to endure in America. So Bow suggests that instead of waiting for that apology to come, their family should start celebrating Juneteenth in a meaningful way.

This is news to the kids, who have no idea what the holiday’s all about. “We don’t celebrate the end of slavery but you wake us up early on Cyber Monday? You are a bad black person,” Junior scolds. “Not anymore,” his dad replies. “From now on, we will be black out loud.”

So the Johnsons buy some strawberry soda and bake a red velvet cake (both hallmarks of the holiday), then fire up the grill for their first official observance of Juneteenth. “Maybe all we can do is try to heal ourselves,” Dre voiceovers in the episode’s final moments, “so when American is finally really to apologize, hopefully we’ll be ready to forgive them.”