A young girl goes missing in ABC’s new thriller Ten Days in the Valley, but the real mystery isn’t who had a motive to take her — it’s who didn‘t?

In a moment, we want to hear what you thought of Kyra Sedgwick’s new series. But first, a brief recap of “Day 1: Fade In”:

The episode begins with Sedgwick’s character, documentarian-turned-TV-showrunner Jane Sadler, trying to meditate. Every time she tries to center herself, scenes from her traumatic childhood flash into her mind. When her daughter arrives home after a weekend with her father, Jane uses it as a welcome opportunity to stop. 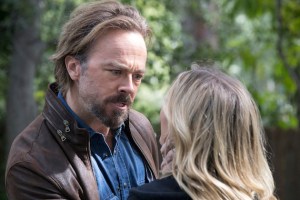 Pete, Jane’s ex-husband, is six months sober. Their relationship is cordial enough… until Jane denies his request to take their daughter, Lake, up to his cabin on a school day. Jane closes the door in his face, then — with the help of Lake’s nanny, Beatriz, goes about getting Lake ready for bed. After Bea leaves, Lake climbs into bed with her mom and whispers that when she’s with her dad, she misses Jane so much “that I think I want to go to Heaven.”

Jane hugs Lake, pops an Ambien and falls asleep with her daughter beside her. But a phone call from the series she works on interrupts her slumber: Due to a production complication, Jane needs to rewrite a crucial scene by 4 am. So she turns on a baby monitor, leaves the French door to her bedroom ajar, and slips out to work in the backyard shed that serves as her office.

In the shed, Jane drinks wine and writes. But when she gets stuck, she calls a guy named PJ, who rides his bike to the shed and delivers her some drugs, which she takes. PJ is an aspiring screenwriter who advises her that “all anyone cares about is who’s got a secret and who’s screwin’ who,” then he gives her a tip that she later uses in the finished scene.

But when Jane goes back to the house hours later, the French door to her bedroom is closed and locked from the inside. And when she breaks the glass and gets inside, Jane freaks out: Lake is gone. 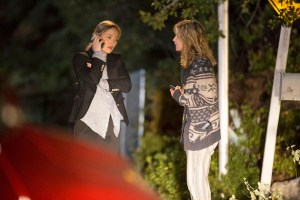 Jane is convinced that Pete has taken their kid — he’s done it before — but Jane’s sister Ali (played by Parenthood‘s Erika Christensen) calls the police anyway. Det. John Bird (Lost‘s Adewale Akinnuoye-Agbaje) shows up to start the investigation and soon discerns that Lake is not with Pete, news that throws Jane into a tailspin.

Despite her fear for her daughter, Jane cagily selects which truths to share with John and which to keep to herself. And as we meet more of the people in Jane’s world, it starts to seem like any of them could be involved in Lake’s disappearance. 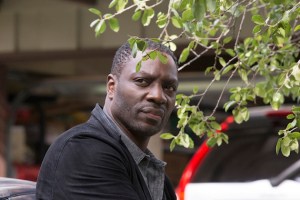 Among them, there’s Matt, the competitive writer (The Cosby Show‘s Malcolm-Jamal Warner) on Jane’s series who makes a pointed comment about kidnapping at the exact wrong time. There’s Bea, who quietly calls her boyfriend and tells him to find the key to Jane’s house that she previously told him to throw away. There’s Gus, Jane’s secret source who supplies her with material for her scripts but who’s angry that she’s not doing a great job of disguising his stories. And then there’s Pete, who is covertly dating Jane’s wide-eyed assistant Casey and who demands that she lie to provide him with an alibi the night that Lake was taken.

At the very end of the hour, we see that Lake is alive, under the impression that her mother gave her permission for whatever’s happening, and being supervised by an unseen man, who reads the girl a book before bed.