The Last Man on Earth Season 4 premiere is, as the acronymic title promised, “messed up beyond all regular-standards.” 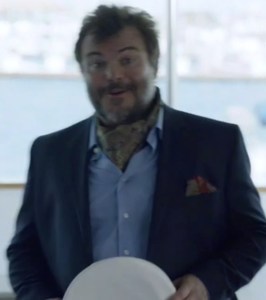 The episode picks up right where last spring’s finale left off. After shooting Pat in the back of the head, Pamela (Kristen Wiig) begins tointroduce herself and (twist!) her very special friend Rear Admiral Roy Billups, played by surprise guest star Jack Black to the group. Before Roy can properly greet everyone, he is shot dead by Pat, who is somehow still alive and firing his weapon. Pamela lodges a few more bullets in Pat’s chest, and Tandy gives him a swift kick in the nuts before calling time of death. She then introduces everyone to her dog, Jeremy, to distract from the double homicide that just went down in front of them.

Later, the survivors hold a funeral for Roy. Todd sings Alphaville’s “Forever Young,” accompanied by Gail on the accordion, then Tandy steps up to say a few words. With Todd’s help, he throws Roy’s body into the ocean, then takes it upon himself to decapitate Pat with a shovel, just to make sure he’s really dead this time. He subsequently places Pat’s severed head and body on separate jet skis and sends them heading in different directions. The skis hilariously wind up colliding not more than 100 feet out. 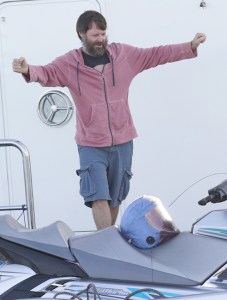 Afterwards, Pamela fills everyone in on what she’s been up to since her drone hovered above their Malibu compound: She eventually made her way to the estate, where she stumbled upon a wounded Pat. After nursing him back to health, the two became intimate, before Roy entered her life and became her new lover.

While the rest of the gang is getting acquainted with Pamela, Melissa is up front trying to steer the boat towards Mexico. With zero visibility, Gail insists they stop for the night and continue their voyage the next day. Unfortunately, she fails to properly anchor the ship and awakens the next morning to find that they’ve drifted far out to sea, with no land in sight.

Gail and Melissa keep quiet about their not-so-minor seafaring predicament, worried that they’ll send the others into a panic. While they’re busy sorting through maps, Carol approaches them to complain about Pamela, who has proven to be an ungrateful addition to the group. She’s burning through their food and supplies, and won’t quit flirting with Tandy. It’s then that Pamela overhears Carol put forth the idea that they leave her behind once they reach land.

The ship eventually sails towards a remote island, at which point Gail and Melissa come clean to the others about getting lost. Everyone then huddles into a dinghy to paddle towards the island. Well, mostly everyone. Worried she’ll be abandoned, Pamela hits Tandy over the head with a paddle and knocks him unconscious. She then disconnects the small boat from the main ship, and speeds off in the opposite direction with Tandy. He awakens to find himself tied up, and pleads with her to take him back to Carol and the others, but she refuses. Meanwhile, Carol, Todd, Melissa, Erica and Jasper approach the remote island in the dinghy, which, unbeknownst to them, appears to be inhabited by another, unknown survivor.

What did you think of the Last Man on Earth premiere, “M.U.B.A.R.”? Grade the episode via the following poll, then hit the comments to flesh out your thoughts.