Does The Last Man on Earth exist in a world where Donald Trump is eventually impeached?

In Sunday’s midseason premiere — which not only introduces Kristen Wiig as survivor Pamela Brinton, but clues viewers in on the emergence of the contagion that wiped out most of civilization — current VP Mike Pence is referred to as the 46th President of the United States.

One could assume that Trump — who is never explicitly mentioned by name in the episode — was one of the virus’ earliest victims, but Pamela is clearly stunned when the plague eventually takes Pence’s life, as well as the lives of subsequent Commanders in Chief Paul Ryan, Rex Tillerson, Steve Mnuchin, Jeff Sessions and Betsy DeVos. 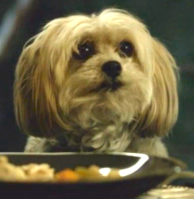 The alternate political history is one of the many fascinating Easter eggs in “Got Milk?,” which similar to Last Man‘s second midseason premiere, does away with its regular ensemble. The episode is instead populated by Wiig, surprise guest star Laura Dern (!) and Jeremy, the world’s absolute cutest dog.

Pamela is first introduced at a benefit for her own foundation, which raises money for canines suffering from hip dysplasia. While attempting to deliver her speech, she is constantly interrupted by frenemy Katherine (Dern), a fellow socialite who takes delight in watching Pamela’s jokes land with a thud. Out of nowhere, a fellow attendee collapses and has to be practically dragged out of the event. This is the first sign of the virus. 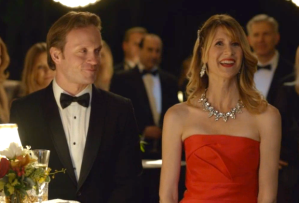 Pamela is next seen having breakfast with her husband Benjamin (played by True Detective‘s Timothy V. Murphy). When she asks  Alana to read her the morning headlines, it is revealed that a Federal Pandemic Agency has been formed to establish guidelines for combatting an emerging viral outbreak.

Pamela is in denial about the unfolding crisis, but later notices just how bad things are when she goes for a ride in her limo and sees every man, woman, child and dog walk down the street wearing protective masks. She informs Benjamin that Katherine and her husband have purchased an underground bunker to escape the wrath of the virus, but both of them are killed off before ever getting the chance to relocate. Pamela eventually steals the key to the bunker, where she and Jeremy take refuge after Benjamin, too, succumbs to the virus.

The rest of the episode takes place in the bunker, and spans a total of three years. During that time, Pamela masters the harp and tries to teach Jeremy how to speak, just to have someone with whom she can communicate. Frustrated by the fact that Jeremy is unable to answer her back, she eventually gives him the option to exit the bunker and fend for himself. When she opens the door, he immediately flees, leaving her all alone.

Fortunately, the bunker is equipped with a big-screen TV that monitors an outside drone that Pamela can control via remote. Just as all hope appears lost, she flies the drone over the Malibu compound. As it turns out, Pamela is in control of the very same drone that Gail first spotted in Season 2. It eventually suffers a “fatal error” on Pamela’s end (which presumably coincides with the moment Melissa shot it down), but not before Erica, Todd, Gail and Carol appear on screen holding up signs to indicate that they’re a peaceful people. This gives Pamela the courage she needs to venture outside the bunker, and the episode comes to a close with our newest survivor embarking on a journey to find the others.

What did you think of the Wiig’s Last Man debut? Were you surprised by just how political things got? Gobsmacked by the reveal that it was Pamela’s drone that once hovered over the Malibu compound? Grade the episode via our poll, then drop your thoughts in a comment below.