Those were the only words Phil could mutter as the Last Man on Earth finale drew to an unsettling close on Sunday, with every survivor’s life threatened by a nearby enemy only familiar to Mike and the audience at home.

Pat Brown, the seafarer (played by Sons of Anarchy vet Mark Boone Junior) who briefly took Mike under his wing upon his return from Space, was fast approaching the shoreline with a tag-team of hazmat-suited assailants bearing rifles, looking as though they were set to kill any remaining survivors out of fear that they might’ve been exposed to the virus.

But enough about the ending. Let’s start at the beginning…

FALLING SLOWLY | Though Mike specifically asked Phil not to come looking for him, Phil took the DeLorean from Back to the Future (because why the heck not!?) to Tucson where he found his younger brother waiting for death in their childhood home. After a series of asinine pranks and a candlelit haircut for Phil soundtracked to Once‘s “Falling Slowly,” Mike attempted to scare his brother off from sticking around for the inevitable by telling him how little he thought of him and his pathetic life.

When Mike eventually caught up with Phil in the backyard to apologize, he discovered that his older brother had been forced to bury their parents on his own, and had even set up a burial plot for him having assumed he had died in Space. Realizing how much his brother had gone through, Mike pleaded with Phil to return to Malibu; as part of his dying wish, he didn’t want Phil to have to suffer another loss first-hand. Phil reluctantly agreed to honor Mike’s request, and upon his exit, left his brother with the duffel bag full of sports balls he had grown to consider friends when he truly believed he was the last man on Earth. (No, you’re crying!)

TARGET PRACTICE | Back in Malibu, the rest of the survivors discovered the drone Gail had previously spotted hovering in the backyard. Todd, Carol, Gail and Erica attempted to flag it down assuming there were cameras attached that could lead them to other survivors, but Melissa shot at the contraption out of fear that someone might be after them. Shortly thereafter, trigger-happy Melissa accidentally took a shot at Carol, a gaffe that sent her straight to the stockade. 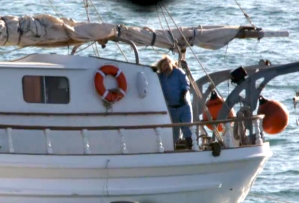 The next day, Gail noticed a ship sailing towards shore (which, after a few too many beers, she had Todd and Erica “confirm-a-doodle-do” with their own eyes). Unfortunately, the bearded fellow aboard the ship was not an OB/GYN (sorry, Erica), but instead Pat, who we last saw leaving Mike for dead after hitting him over the head with a rock to prevent his trek to Tucson. Now he was armed and speeding towards their Malibu home, putting the future of the entire human race in jeopardy.

What did you think of the Last Man on Earth Season 2 finale? Thoughts on the setup for Season 3? Grade the episode in our poll, then sound off below.