You might know the basics about the second season of The Exorcist: new location, only a couple of characters carrying over from Season 1, yadda yadda. But as Friday’s Season 2 premiere reminds us, the devil is in the details.

And those details? Still hella scary. Read on for the highlights of “Janus.”

ON THE RUN | The hour opens with Father Tomas praying in an empty church. From the eerie feel of the scene, you know something’s not OK, but as he walks outside, past some children’s handprints painted on the side of the building, everything looks normal: There’s a kids’ party going on behind the church, Patsy Cline’s “Walkin’ After Midnight” is playing, and a woman is sitting on a bench, holding an infant. “Cindy?” Tomas asks, surprised. She calls the baby on her lap “my little miracle…” and then things get weird(er).

A kid breaks open a piñata, and black sludge pours out, pooling on the ground until a woman’s head pokes out of it as though she’s emerging from the pits of Hell. Cindy’s eyes cloud over in that demon-y way. And then suddenly, Tomas comes to… and he’s driving a pickup truck down a dusty country road. In the truck’s bed, Marcus is sitting on top of a possessed woman — it’s Cindy! — and trying to dodge the bullets that Cindy’s ticked-off husband is firing at them from his own vehicle. 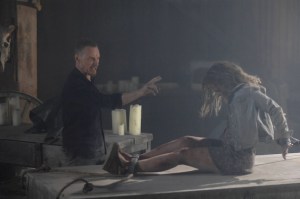 After the holy men finally lose the chase car, they hole up in an empty barn and tie Cindy down to a table. As they do so, we learn that Tomas has been Marcus’ apprentice for six months, and that Cindy recently lost a child. Then Tomas confesses that he went into a fugue state while driving, and Marcus abruptly sends the young priest into town to get supplies. “I’ll have him. You’re right to be worried. He has talents you’ll never possess. He shared them with me,” the demon inside Cindy tells No-Longer-Father Marcus after Tomas leaves. “I saw him from the inside. He opened his mind to me. He let me in.” This worries Marcus greatly…

TRY IT MY WAY | … and it probably should, given that Tomas is starting to think there might be an alternative demon-exit method than the “ritual and repetition” that Marcus — and just about everyone else who performs exorcisms — uses. Tomas wants to “go to” Cindy, like in her mind, but his defrocked mentor angrily points out that doing so would put his mortal soul at risk. “You said we couldn’t save Angela. I brought her back,” Tomas argues nastily, referring to the events of the Season 1 finale, and Marcus is taken aback. He reminds Tomas that “with pride comes disgrace. With humility comes wisdom,” but then goes to deal with Cindy’s husband, who has tracked them to the barn.

Outside, Marcus takes one for the team by trying to explain what’s going on… and then just throwing down with Cindy’s man and one of his friends. While they’re busy punching each other, Tomas grabs Cindy’s face and demands that the demon show itself to him. Then his eyes cloud over, and he’s back in the vision at the church.

This time, though, it’s nighttime and the church is empty, save Cindy sitting in a confessional booth. When she opens her lips, “Walkin’ After Midnight” comes out — and then a hand emerges from her mouth and that hand starts choking Tomas. Marcus, Cindy’s husband and his pal all run into the barn to see Tomas struggling; they break it up, and Cindy’s hubby unties her and carries her away. As she looks back, her eyes are completely black, and she gives Marcus and Tomas a sinister grin. 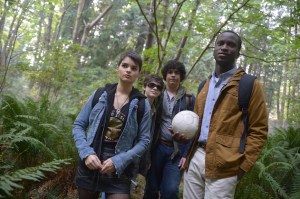 A NEW, NEFARIOUS CHAPTER | Elsewhere, we meet Andy, who runs a suburban foster home for four teens and a little girl. As he hands the kids their lunches before they head out to school, it’s clear that he’s a good egg who genuinely cares for his charges. He reminds the older children that there’s a social worker coming to stay with them for a few days and observe their situation; after they leave for school, Andy goes upstairs and chats with Grace, who — for reasons we don’t yet know — really likes staying in her room (to the point that she’s homeschooled) and puts on a creepy pillowcase mask when she’s forced to interact with others.

Later, we see the older kids in the woods. Verity, a girl, is spooking the others with a scary story that ends with a dare to stand on some rickety-looking slats suspended over an old well. Shelby, a boy who’s into praying and such, tells her to knock it off. Caleb, who’s blind, seems intrigued by the tale. As they all leave, Truck, a large boy who’s on the spectrum, kicks a ball into an abandoned house near the well. The spooky soundtrack (all whispers and ominous chords) makes it feel like some spectral force is going to kick the ball back out or something, but nothing happens.

Rose, the social worker, arrives. She and Andy know each other but say very awkward hellos: We later learn that they were once a thing, and he hopes that won’t stand in the way of the kids getting a “fair shake” in her report. Everything’s going well at dinner that night until Caleb — who talks about his father like the man is a rockstar — learns that his dad failed to show up for a custody hearing that morning. The boy is hurt, and angry, and starts pounding his fist on the table. But Andy deftly defuses the situation, pointing out how much he loves Caleb and how happy he is that he’ll be at the house for a while longer. 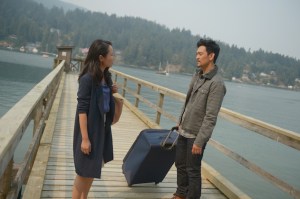 WHEN THE WEIRD STUFF STARTS | Since this is The Exorcist, you just know that this loving little environment is about to get really scary… and it all begins later that evening, as the kids are getting ready for bed. After Rose notices a painting by Nicole Kim hanging in the hallway (it appears that Andy had a wife who’s no longer in the picture), she sees Caleb intently listening to a record he’s playing backwards in his room. He turns his head toward Rose, but we can’t see his eyes because he’s wearing his sunglasses, but the whole thing is :shudder:. Then, Truck is in the kitchen making some really otherworldly noises, but Andy comes down and tells a worried Rose that the boy is a habitual sleepwalker who just needs to be hugged and helped back to bed.

Upstairs, though, Andy notices Caleb is missing, and the whole house mobilizes to look for him in the woods. There’s a very disturbing broken cocoon full of worms? maggots? caterpillars? in one of the trees, and Andy takes note of it, but then he sees Caleb standing on top of the well and runs to him. Andy catches Caleb just as the slats break, saving the boy from falling, and holds him tight as Caleb seems to come around and not realize where he is or what he was doing. Back at the house, as Andy carries Caleb to his room, we (but not Andy) see that Caleb’s eyes are clouded over the same way Cindy’s and Tomas’ were earlier in the episode.

What’s more, those painted handprints Tomas saw in his vision? They’re on one of the walls in Andy’s house. Uh-oh.

Now it’s your turn. Grade The Exorcist‘s premiere via the poll below, then hit the comments with your thoughts on the episode!