Jane Sadler, Kyra Sedgwick‘s character in Ten Days in the Valley, is a television showrunner. She’s a mother. She’s an ex-wife. She’s a sister. And, at the point that her young daughter goes missing in the series premiere, she’s also a bit of a hot mess.

Which is exactly why Sedgwick, who hasn’t taken a series-regular role since The Closer wrapped in 2012, couldn’t wait to play her.

“First of all, I want to play real people, not likable people. You know what I mean? I love her, and to me she is real and authentic, and that’s what I want to be, real and authentic. Especially if I’m going to come into people’s living rooms,” she tells TVLine, adding with a laugh, “Unless I’m playing a superhero —which no one’s asked me to be yet, but I’m ready.” 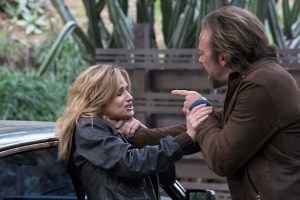 In the ABC thriller’s debut (Sunday, 10/9c), viewers only spend a short while with Jane and daughter Lake before the girl goes missing one evening while Jane is working on rewrites for the cop drama on which she is an executive producer. (Not coincidentally, Ten Days is the creation of Rookie Blue EP Tassie Cameron.) As the police launch their investigation into Lake’s whereabouts, everyone from Jane’s ex-husband to her competitive co-workers starts to look guilty; the whodunit’s 10-episode first season narrows the suspect pool each week.

Complicating matters is the fact that, for various reasons, Jane isn’t completely honest with the cops at first… nor as the search picks up momentum. Still, Sedgwick asserts, “I gawk at the idea when people say, ‘Is she a good mother?’ I’m like, ‘She’s a real mother, and plus: That’s totally sexist. You’d never say is he a good father.’ No, I didn’t see any articles written about how [Breaking Bad‘s] Walter White was a bad father, you know, so it’s amazing. We’re so ready to shame the women. Don’t even get me started.”

She continues, “It’s so important to talk about, in any venue you can, that women are supposed to have it all. They’re supposed to be able to do everything, and do everything well, and that the truth is everyone’s reaching for something, whether it’s TV, or online shopping, or booze, or weed, or whatever, and most of us are coping in the best way we can.”

“I’ve spent a lot of time on the set of The Closer on the phone with my bawling daughter [Sosie Bacon], and part of why she was bawling is because I wasn’t there,” Sedgwick says. “The minute you have a child, you already feel guilty. Women feel a tremendous amount of guilt no matter what, even if they don’t have a child. Add a child and forget it! It’s like mothers equal guilt.”

She adds: “It’s a profound truth that is great to talk about and makes [Jane] relatable. I love that we were edgy about it, that we kept it really real.”