Promos for the Season 8 premiere of CBS’ Blue Bloods had you thinking that Frank being fired as police commissioner was The Big Twist.

But that was far from the truth.

Most Shocking TV Deaths of All Time

Yes, Interim Mayor Dutton (played by The Sopranos‘ Lorraine Bracco) did attempt to end Frank’s tenure after he refused to release the disciplinary record of an officer involved in a bad shooting. But thanks to in part a helluva pep talk from Baker, the PC decided to fight for his job (though in the end he didn’t really have to. Those polling numbers!).

What instead blindsided viewers was the gradual reveal that Danny Reagan’s wife, ER nurse Linda (played by original cast member Amy Carlson), is dead, having perished on May 28 in a medevac helicopter crash. The tragic twist trickled out slowly over the first half hour, via vague references to Linda not being in Danny’s life. Our first eavesdropping on a therapy session found a retirement-pondering Danny angrily accepting “fault” for whatever happened with Linda, after the fire that destroyed their home (yet thankfully left the family unscathed). Then, in a second session, Danny’s shrink made it clear to us that Linda was no less than dead. 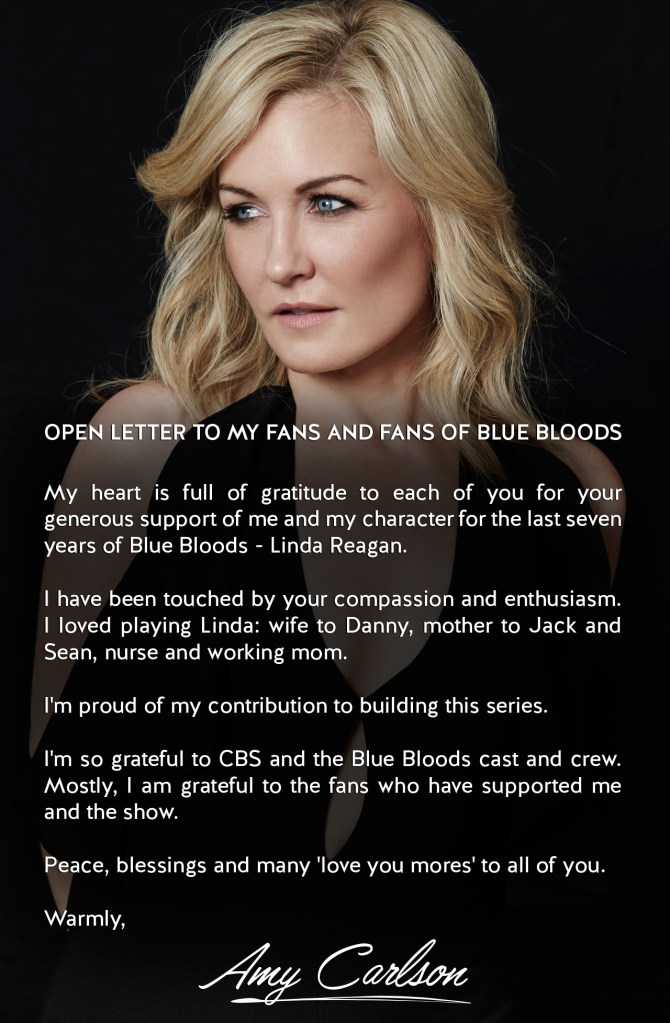 Carlson, who has been with Blue Bloods since its September 2010 premiere, addressed her exit from the series with a statement issued on Friday night (at right). As confirmed weeks later at a Paley event, the actress chose to move on after fulfilling her original seven-year contract.  “My heart is full of gratitude to each of you for your generous support of me and my character for the last seven years,” she wrote. “I loved playing Linda: wife to Danny, mother to Jack and Sean, nurse and working mom. I’m proud of my contribution to building this series…. Mostly, I am grateful to the fans who have supported me and the show.”

Shortly after the unexpectedly emotional episode ended, TV husband Donnie Wahlberg shared this about Carlson via Twitter: “In my 35-year acting/singing career, I’ve worked with some great talents. Amy Carlson and [original Blue Bloods partner] Jennifer Esposito are two of the greatest!

“I know many Blue Bloods fans will miss Linda Reagan. None more than me,” he added. “Amy Carlson is a gift, a light and a true friend on- and off-screen.”

Were you stunned to learn of Linda’s death? Weigh in on the surprise send-off and the premiere as a whole.