Blue Bloods viewers are still reeling from this season’s premiere, where midway through the otherwise unassuming episode it was revealed that Danny Reagan’s wife had perished, months prior, in a work-related accident.

“Linda’s death wasn’t your fault. She was doing her job [as a nurse]. She died doing what she loved,” therapist Dr. Dawson noted, trying to ease Danny’s sense of blame. “She died in a helicopter crash, airlifting her patient.”

And just like that, the bandage was ripped off to reveal a truth that no one was expecting — and one that, if it had to be, many would have preferred to see play out on-screen.

But as confirmed by cast on the red carpet at Blue Bloods‘ PaleyLive NY red carpet event on Monday, Carlson opted to leave the series after seven seasons — a decision that, while lamented, has “reignited” CBS’ well-watched Friday drama. 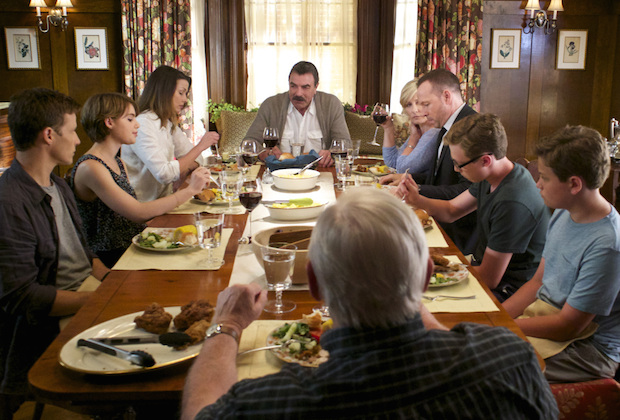 “What I think it has done is opened up a whole new bottle of storylines,” Bridget Moynihan, who plays Erin, shared with TVLine. “I know it’s sad to see somebody go, but it has reignited some beautiful, creative juices.”

Danny’s longtime partner, Detective Maria Baez (played by Marisa Ramirez), is among those who will (try to!) support him during this difficult transition. “They say that when detectives work so closely together as partners, it’s like they’re almost married,” Ramirez noted. “So he had the support of his wife and now he needs the support of his partner — but we’ll see if he takes it, because he’s very, very stubborn.”

As for the various ways the audience has reacted to the off-screen death, Moynihan was pleased to hear that at least some people appreciated the impact of the dramatic, non-spoiled twist — so rare an occurrence in a world rife with entertainment news. “It’s nice to hear that perspective,” she said, “because you never know how people are going to receive a sudden death.”

That said, it has to feel a bit strange to have one less place setting at the weekly Reagan family dinner. “Amy made the decision to leave, but we adore her,” shared Sami Gayle, who plays Nicky. “We’re very sad she left.”

Want scoop on Blue Bloods, or for any other show? Email InsideLine@tvline.com and your question may be answered via Matt’s Inside Line.