Ah, seems like old times… if old times were even better than you remembered. Those of you who read TVLine’s review of NBC’s Will & Grace revival, which premiered Thursday, already knew that we went into it expecting the equivalent of what Karen would call a “Laura Bush pour” of a martini, only to instead be served “the full-on Pat Nixon.” Now, finally, you’ve seen why we were so high on the show.

Right off the bat, “Eleven Years Later” dispatched the sitcom’s 2006 ending, awakening Karen from a dream to find that Will was single again; Grace, divorced; and both, childless. “Oh, what a relief,” cried the boozehound, speaking for us all. “Nobody wants to see you two raise kids.” Jack was still living across the hall from Will, Karen was still rich and married to Stan, and Grace was once again cohabiting with her bestie. But only till the dust settles. “On your genitals?” deadpanned Jack. No, on the divorce.

That bit of housekeeping out of the way, the episode — as you’d rather expect, given the election-themed reunion video that got this whole comeback going last year — then veered into politics. After Will impressed Grace by writing letters to a Congressman who was out to gut the EPA, she decided to make a difference, too — by telling Karen to stop rubbing her Trump love in her face at the office. Or at least, “No more screaming ‘Lock her up!’ when I wear something she doesn’t like.”

But Will, it turned out, was less interested in saving the planet than in scoring a date with the Congressman, described to Jack as “a Reynolds-point-Gosling” on the Ryans scale. And when Karen, through gal pal Melania, scored Grace a chance to redecorate the Oval Office to “look like [Trump’s] there from time to time,” she couldn’t bring herself to put her money where her mouth was. 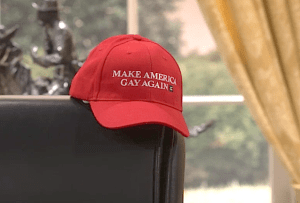 Naturally, Will kept from Grace his and Jack’s plan to attend Congressman Hottie’s speech at the White House Rose Garden, and she kept from Will her and Karen’s plan to check curtain swatches against the president’s skintone — using an actual bag of Cheetos — in the Oval Office. So, when they each realized what the other was up to, a big confrontation-slash-pillow fight ensued, and the decision was made that, rather than be all up in one another’s business again, she’d move out.

Only, of course, Grace wasn’t really going anywhere. Though she had her bag “packed” by the time Will returned home, there was nothing in it. Same as we all did, she anticipated them working it out. Later, when Karen complained that the two of them got ultra-preachy when they talked politics, Grace suggested that they “should just be what we’ve always been” — as Jack put it, “a sad middle-aged lady… and Grace.” Speaking of whom… though she didn’t get to redecorate the Oval Office, she did manage to “make one little change,” leaving a thoughtful present for Trump on his chair. (See above.)