Two things you should probably know before diving into this review: 1. It was with some trepidation that I sat down to watch NBC’s revival of Will & Grace (premiering Thursday, Sept. 28, at 9/8c). I had loved the original series but drifted away from it well before its 2006 finale, when it began to feel less like… well, the original series. So I feared W&G 2.0 would remind me more of the sitcom I’d abandoned than the one that I’d adored. 2. I’m not an LOL kinda guy. I enjoy funny things, of course, but I don’t generally laugh, and when I do, it’s rarely out loud.

Now then, two things you should definitely know, even if you don’t read another paragraph of this review: 1. The reboot, at least based on the two episodes I’ve seen so far, is 100-percent the W&G that I — and likely you — loved. Stiletto-sharp with marshmallow insides. 2. I laughed my f—ing ass off. Out loud, even!

In the first 30 seconds alone, we get rapid-fire game-night zingers pointed at everyone from Melania Trump to Jada Pinkett Smith. Seriously, you’ll think you’ve died and gone to pop-culture heaven. And that’s before Mrs. Peacock and Julia Sugarbaker get worked into punchlines!

As promised, the series’ original ending is chucked, in a manner that’s as sublime as it is silly — and totally justifies, if not breaking the fourth wall, at least denting it a little. Once the RESET button is hit, it’s just Eric McCormack (Will), Debra Messing (Grace), Megan Mullally (Karen) and Sean Hayes (Jack), pros at the top of their game, absolutely killing it. 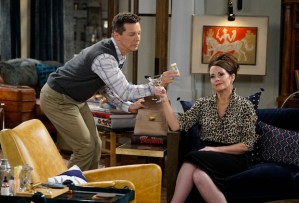 Which is hardly a surprise — the lot of ’em have his and hers Emmys. But what is a surprise, and a relief, is that, as blessedly same-y as their characters feel, they also come off like people for whom the years that have passed really have passed. Well, maybe not Karen. But she probably blacked out for a few of them. Grace is closer to self-aware than she’s ever been. And Will and Jack are dealing, hilariously, with daddy issues — as in, now that they’re older, that’s what they are to younger men. (The scenes in which Jack tries to slim his figure by donning a full-body compression stocking are physical-comedy gold, and Hayes milks ’em for all they’re worth.)

As you’d expect, the political commentary is on point, savage and funny as hell. Whether a joke is aimed at President Trump or a generation of gays who don’t know Stonewall from Stonehenge, W&G hits the target with impressive consistency. And, at the end of the day, it reminds us that, beneath the barbs and bon mots, the show has a heart that’s as strong as it is soft.

THE TVLINE BOTTOM LINE: This is going to sound like hyperbole, but the Will & Grace reboot is as good as you hoped it would be and quite possibly better. It’s that good.