Now that Law & Order: SVU has reached Season 19, maybe it’s time for the NBC procedural to give its long-persecuted heroine Olivia Benson a bit of a break?

“You know what it is?” he tells TVLine. “If you have a great life, nobody wants to look at it. Just think. Say Olivia had a great relationship. She comes home from work, she sits on the couch, she eats Chinese food and watches television.” He laughs heartily. “That’s not dramatic!”

Given what Benson already has endured over the series’ long run (failed romantic relationships, a soul-sucking adoption process, the loss of a close partner and a scarring kidnapping and attack, just to name a few), we’re a little afraid of what the trauma ahead might turn out to be. And Chernuchin isn’t giving much away. “It’s all going to come together,” he says enigmatically. “Everything she’s gone through in the past.”

Complicating matters for the cop: Her son, Noah, is a bit older now, which means he’s acutely aware of every time his mom is at the precinct instead of at home with him. “She’s going to be torn between home and work. Every time she looks left, she gives up something to the right. Every time she looks to the right, she gives up something to the left. She’s going to be torn in half between her own life and Noah, and the job.” 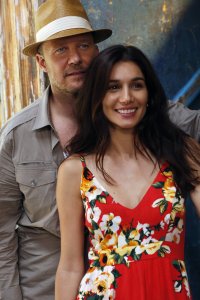 That dilemma begins right in the season opener, which airs tonight (9/8c) and which follows Fin as he travels to Cuba to reel in an elusive rapist played by Nashville alum Will Chase. (“We shot in Brooklyn, and it really does look like Cuba,” Chernuchin says.) A hallmark of the season, the EP adds, is that it will “make each case sort of a moral mystery. It’s not just ‘Let’s catch the bad guy.’ It’s, ‘We catch him, now what do we do with him?’ Or ‘Is what he did so horrendous?'”

To that end, the legal part of the show “will become a little bigger than it was, because that’s always a good forum for what I call ‘the drama of ideas’ in the courtroom,” he adds. Central to that is the arrival of Chicago Justice‘s Peter Stone, who will become a “huge foe” for ADA Barba. Stone is “the odd man out at first. He’s the new guy,” Chernuchin says. “He comes in with a legacy because of his dad, [Law & Order ADA] Ben Stone, and he has kind of a rep in Chicago. He’s the outsider.”

The EP isn’t willing to say quite as much about Brooke Shields’ mystery-cloaked guest-star stint in the upcoming season, except for this: “She throws a wrinkle into everything.”