Well, new Law & Order: SVU showrunner Michael Chernuchin did promise that he was going to “throw the kitchen sink” at Olivia this season…

The Season 19 premiere, “Gone Fishin’,” certainly makes good on that promise, turning an innocent moment from the lieutenant’s home life into fodder for an investigation that could cost her that which she holds most dear: her son, Noah.

Meanwhile, Fin takes a little “vacation” to Cuba and winds up bringing home a perp who managed to get away the first time. But the cop’s illegal actions lead to a legal battle in which the serial rapist nearly goes free once more.

It all begins as Olivia is walking Noah to school. While her attention is focused on a call from work, the boy absentmindedly begins to cross the street and is almost hit by a taxi. At the last minute, Liv yanks him back by the arm. Disaster is averted, but she’s practically shaking as she hugs him close. 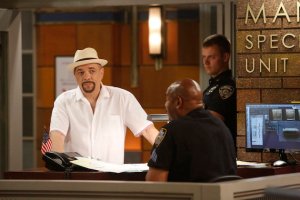 Meanwhile, in Cuba, we see a man (played by Nashville‘s Will Chase) kiss his wife and daughter goodbye and go about his daily routine. As he leaves a café, two men grab him and shove him in the back of a van, where Fin is waiting for him. “Buenos dias, pendejo,” the cop says.

The nabbed man, Byron Marks, is wanted for doing terrible things to three women a while back. But he slipped away before the lab could test his DNA, which was a match. Oh, and he’s a smug jerk with a powerful lawyer who argues that his client was tortured after Fin apprehended him abroad. (Apparently, grabbing a fugitive and transporting him back to the states isn’t illegal, but treating him badly along the way is.) But a judge finds no mistreatment, and the case is reopened.

However, two of Marks’ victims have no interest in testifying against him: “I’m not going to let that man take up any more of the time I’ve got left,” one tells Carisi and Rollins. On the way back to the car, Rollins admits that she was charmed by Marks during the original investigation, so she ruled him out as a suspect after interviewing him. “That bastard changed the way I look at the world,” she recalls ruefully.

There’s a whole back-and-forth with the third victim, Karla (Justified‘s Amy Smart), and after Marks is released on his own recognizance, the rapist sneaks away and winds up at Karla’s house. That’s where Olivia finds him… with Karla holding him at gunpoint and promising to make him pay for ruining her life. It’s very tense — at one point, in an attempt to distract her, Olivia directs Karla to point her gun at Olivia instead of at Marks — but the situation is eventually defused without anyone getting hurt.

Eventually, Karla tells her story to Marks’ wife, who is horrified to hear the violence of which her husband is capable. “You have a young daughter,” Benson says to Elana Marks. “Do you really want someone like Byron Marks raising your daughter?” And that’s enough for Mrs. Marks to change her testimony. Cuba also withdraws its objection to Marks’ arrest, and all that’s left is for Barba and Marks’ lawyer (played by House‘s Peter Jacobson) to work out a deal for Byron to spend at least 20 years in jail.

Happy ending, right? Not for Olivia, who is summoned to Noah’s school when the child tells his teachers that his mother is responsible for the hand-shaped bruise on his upper arm. Liv and Noah later work it out — she reminds him that he has to tell the whole story when he says something like that — but it’s too late. Brian Cassidy drops by Olivia’s apartment at the end of the episode to say he’s un-retired and working as an investigator for the District Attorney’s Office. And because the school has filed a child-endangerment complaint against Olivia, “We’re investigating you.”

Your turn! What did you think of the episode? Grade the premiere via the poll below, then hit the comments!