Lethal Weapon‘s sophomore season opens in Mexico, because what would TV’s best partnership be without a little bromantic getaway?

But the older cop isn’t having much luck at the start of Tuesday’s season premiere (Fox, 8/7c), and that doesn’t sit well with Mrs. Murtaugh backat home. “Trish is getting a little bit impatient with him. She’s wondering what the hell is going on,” Miller says, laughing. “What she finds out is that this is all kind of off the reservation. He’s using his vacation days to be down there. He’s racked up considerable credit card bills, staying in all these fancy hotels and things, and it basically seems like he’s been on this two-week vacation.”

But then a body falls, out of nowhere, and lands on the hood his car. “He realizes, ‘I think I just found Riggs,'” Miller continues. “He races in, and we pick up Season 2 from there.”

Of course, we couldn’t let the show boss set up a tease like that without drilling him for more Season 2 scoop. Read on for all the goodies.

SO, WHAT’S RIGGS BEEN DOING IN MEXICO? | When Murtaugh makes his way upstairs, his partner has Flores at an extreme disadvantage, and Miller says the scene is the Fox drama in a nutshell. “You get some of the intense drama and you get the action, certainly, with some of those beats,” he previews. “You also get moments of bonding between the two guys. You get comedy… Hopefully, it conveys something, which is that this show can, within the same three- or four-minute sequence, have you on the edge of your seat with the action, genuinely laughing, and then at [another] point emotional.”

BOOM! | Miller promises “a lot of shoot-em-up stuff, people flying out of buildings, blowing up cars” during the season’s opening hour, followed by the series’ first water-action sequence in Episode 2. “We do a boat chase on water with this super mega yacht,” he says. “Then Avery has a boat with his partner, Todd, so there’s a chase sequence that happens — and Murtaugh gets to harpoon a guy.”

WAIT, WHAT’S THAT ABOUT AVERY’S PARTNER? ISN’T HE THE BOSS? | As previously reported, Michelle Hurd (Blindspot) will recur in Season 2 as Gina Santos, a police chief who’s brought in to stifle some of Riggs and Murtaugh’s more egregious, so-called law enforcement And because Capt. Avery has been overseeing the rogue pair, she becomes the boss of all of them. 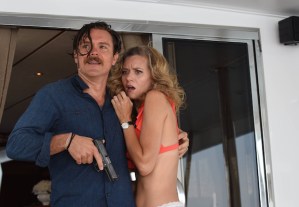 AGENT PALMER’S RETURN | As Riggs starts, finally, to get past Miranda’s death, he thinks, “‘OK, I’m normal. I’m going to do normal stuff. I’m going to clean my trailer. I’m going to exercise,’ and none of that goes very well,” Miller says. “So he’s like, ‘Maybe I should start dating.'” But, because Riggs is Riggs, he doesn’t just pick up the phone and call Hilarie Burton’s DEA Agent Karen Palmer, with whom he had a little sumthin’-sumthin’ in Season 1. Instead, he uses a case involving performance-enhancing substances to lure her back to town. “She, of course, realizes that he’s just been brought in because he wants to make something happen romantically, and we have a couple of episodes of them together, which is great,” the EP adds.

THEY GROW UP SO FAST | Episode 2 will mark the start of RJ Murtaugh’s matriculation… and his parents’ freak-out about same. “Murtaugh’s been a little bit hesitant about him even going [away] to college, wanting him to go to a school closer to home, and Trish has been the one [saying] he has to leave the nest,” Miller says. “But at the end of the episode, it’s Trish that breaks down and doesn’t want to let her boy go.”

WHAT’S UP, DOC(TOR CAHILL)? | Time spent on the counselor’s couch will prime Riggs for a slew of childhood memories, which will usher in flashbacks featuring CSI: Miami‘s Rex Linn as Papa Riggs. “For those who have actually done some therapy, you end up spending a lot of time talking about your childhood. So what she’s getting into with Riggs is really the good, juicy stuff that she was trying to help him overcome,” Miller says. He also vaguely refers to some “nice things later on in the season that we start to play with the two of them,” so make of that what you will.