Martin Riggs’ devotion to his dead wife, Miranda, has nearly killed him several times since Lethal Weapon‘s debut. But in the Season 2 premiere, his love for his police partner — and vice-versa — proves a lifesaver.

At the start of “El Gringo Loco,” Riggs is still MIA in Baja, Mexico, two weeks after the events of the finale. Murtaugh is there, too, searching for his co-worker on his own dime — much to the consternation of Trish back at home. But when shots are fired in a fancy hotel and a body is thrown out the window, Murtaugh has an inkling he’s close. 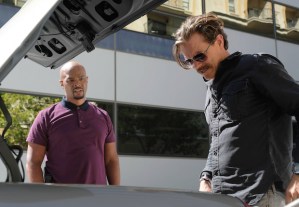 Inside the building, Riggs has Tito Flores — the head of the cartel responsible for Miranda’s death — stripped to his underwear and tied up. Though the crime boss promises to give the cop anything he wants, Riggs replies, “Don’t you remember? You took away anything I ever wanted when you took away my wife.” Riggs is about to shoot Flores, then himself, but is stopped by Murtaugh’s entrance into the room. When Martin quickly sets himself back on task, Murtaugh is desperate, and he blurts “I love you, man!” — which has the desired effect of distracting Riggs from his self-appointed duty. Then there’s a shootout, and by the end, all of the cartel guys are dead, and Riggs and Murtaugh are loading the still-alive Flores into the trunk of a car for justice back in the United States.

Their trip gets sidelined, though, when Riggs accidentally slams the trunk on Murtaugh’s hand so hard, it severs the tip of his finger. And during the subsequent trip to a clinic to have the digit reattached, a high-on-morphine Murtaugh accidentally lets it slip to his nurse that there’s a notorious drug kingpin in the trunk of his car. When the detectives go back to the vehicle, Flores is dead, with two bullets in his head.

The nurse’s brother, a Border Patrol agent, comes forward to take responsibility for the murder. But it turns out he’s being blackmailed by the true killer: Raul Mendez, the second-in-command at Flores’ organization. And even though Murtaugh and Riggs are on administrative leave, they head back to Mexico to crash Flores’ funeral and out Mendez as a lying traitor, thanks to audio of an incriminating phone call the Border Patrol agent recorded.

There’s another shootout — this time in the church, with Riggs making his exit through a stained glass window — but the partners bring Mendez back for arrest, and his cooperation allows the department to bring down a huge chunk of the cartel. Riggs and Murtaugh are reinstated. Murtaugh makes amends for his long absence by throwing a party for his family. Riggs buries his wedding ring in the soil covering Miranda’s grave and promises her “I’m never going to stop missing you.” And Dr. Cahill stops by Riggs’ trailer to notify him that being “back on the force means back on the couch,” and that their therapy sessions will begin again soon.

Now it’s your turn. What did you think of the premiere? Grade it via the poll below, then make your voice heard in the comments!