Two of New York’s finest are behind bars in the Season 5 premiere of Brooklyn Nine-Nine. Will they make it out alive?

As you’ll recall, Jake and Rosa were framed by Lt. Hawkins for a string of bank robberies, and face up to 15 years in prison. We first catch up with a newly bearded Jake, who is in protective custody at a maximum-security facility in South Carolina. Since his incarceration, he has tried to remain positive, and has even made a friend out of bunkmate Caleb (The Goldbergs‘ Tim Meadows), a cannibal imprisoned for eating young children.

It’s Visiting Day, and Jake is super excited to see Amy and Charles. He’s less excited when they tell him that they’re no closer to incriminating Hawkins. Their reunion is then cut short when the prison is forced into lockdown, cutting into Charles’ “touching time.” 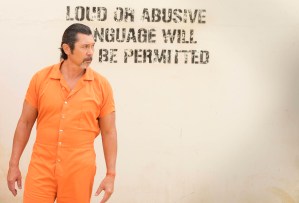 Afterwards, Caleb puts Jake in contact with Romero (Longmire‘s Lou Diamond Phillips), a gang leader in Gen Pop who is able to get him a cell phone in exchange for a hundred picante beef-flavored ramen soups. The trade goes unnoticed, but the warden (Halt and Catch Fire‘s Toby Huss) eventually finds the leftover soup packets in Jake and Caleb’s cell. As punishment, they are removed from protective custody and left to fend for themselves in Gen Pop.

Once transferred, Jake sets out to join a gang to guarantee his own protection. He is rejected by nearly every crew in the yard (well, except for ISIS!), and turns to Romero as a last resort. Romero is willing to let Jake join his gang, but there’s a catch: He has to kill a guard by the name of Wilson. Jake manages to convince Romero that they only need to get Wilson fired, but even that proves easier said then done. He uses the contraband phone to record Wilson beating him up, but is caught by the warden before he has a chance to send the video to anyone. The warden then offers to fire Wilson in exchange for Jake becoming his personal snitch. Jake agrees to the deal, albeit reluctantly.

Later, Romero pays Jake a visit, interrupting his call with Amy to welcome him into his crew. Jake goes in for a handshake, but Romero grabs him by the neck and threatens his life instead. “I know you used to be a cop,” he says. “If you screw me over, I will cut your testicles off and watch you bleed to death in the dirt.” (Gulp!) Jake then promises Romero that he’s got nothing to hide. 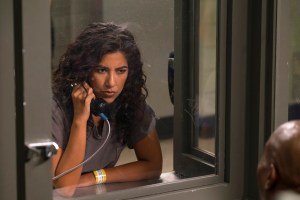 Rosa, meanwhile, is locked up in a prison in Connecticut. Holt and Terry pay her a visit and ask if there’s anything they can do for her on the outside. This leads to a long list of favors, including moving her furniture into storage, filing her taxes and typing up “crazy sexual” emails to Pimento. Last but not least is cancelling her cable, which proves to be the most difficult task of all. Holt spends over six hours on the phone just to get through to a real person (“Rodrigo!!!!!!”), only to get duped into adding Epix to her cable package.

Additional highlights from the season opener…
* In Charles’ dream, he “spoils himself” by eating a stick of butter like it’s a popsicle. Also: Charles’ hair!
* The latest title of Amy’s sex tape: “I Can’t Find Anything and I Don’t Know What to Do!”
* Hitchcock also visits the Connecticut prison, but not to see Rosa. He’s apparently in a relationship with a fellow prisoner, and makes out with her through the glass.

What did you think of Brooklyn Nine-Nine‘s first episode back? Disappointed you have to wait an entire week to watch Part 2? Grade the episode via the following poll.