Need to catch up? Check out the previous Halt and Catch Fire recap here.

To mark the occasion, Gordon ditches work, and takes Haley out to launch remote-control rockets at Cameron’s Airstream. Katie and Joe also tag along, but Haley doesn’t invite any friends from school. During the outing, she helps design Gordon’s rocket, painting on it a unique illustration that becomes important at the end of the episode.

The following afternoon, Joe treats Haley to lunch at her favorite fast-food joint, Hound Dogs. It’s there that he discovers that Haley has a crush on a girl: a cashier named Vanessa, who shares her love of indie rock.

Afterward, Joe learns that Haley will not be allowed to work at Comet until she gets her grades up at school. He asks Gordon to reconsider, explaining that Comet is the only place where Haley feels like she belongs. He doesn’t ever reveal to Gordon that Haley might be gay, but acknowledges that he was similar to Haley when he was her age. He also knows what it feels like to have a father who doesn’t understand you. Gordon, already upset about Haley, lashes out at Joe for attempting to give him parenting advice without having any kids of his own. In a moment of anger, he also tells Joe that he’ll never know what it’s like to be a parent.

Joe, of course, is thinking about having kids. All the time he has spent with Haley has made him realize that he wants a family of his own. But after Gordon’s comment, he begins to second-guess himself. Is he still the same a-hole we met in Season 1? And if so, is that guy capable of being someone’s father? Bosworth assures him that he’ll be up for the task when and if Cameron is ready to have children: Just acknowledging that he was once a jerk means he’s a changed man.

The next day, Gordon makes a pit stop at Hound Dogs to pick up breakfast, and Vanessa is behind the register. After he orders, he notices the exposed tattoos above her chest. It’s the same design that Haley drew on his rocket. He doesn’t say anything, but he’s clearly connected the dots. 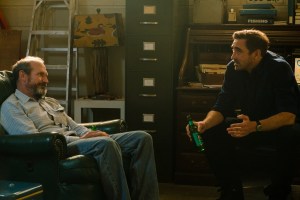 THE TRUTH COMES OUT | Bosworth’s back home following his heart attack, and appears to be making a full recovery. Diane comes out to the garage to talk to him, and recalls how scared she was having no legal say in his medical care. Not wanting to go through that again, she asks him to get married, but rather than say yes, he divulges all of his secrets. No longer able to live with the guilt, Bosworth tells Diane about his bad investment. He also reveals that Cameron was responsible for the algorithm that saved Rover. Diane is upset, and exits the garage without saying a word.

HOW ABOUT ANOTHER DRINK? | Donna is incredibly overwhelmed throughout the episode, and becomes a bit too reliant on alcohol to calm her nerves. This, of course, becomes a problem. For one, she takes it upon herself to find Rover’s next chief technology officer, then sleeps with prospective new hire Bobby Aaron after one too many cocktails. She wakes up the next morning at his place, and it’s clear things are too awkward now for them to proceed professionally.

Later, Diane confronts Donna about Bosworth’s secret-keeping. She’s willing to accept that mistakes have been made, but wants Donna to go ahead and get Cameron to sign away the proprietary rights to her algorithm. Donna then expresses an unwillingness to go to Cameron, forcing Diane to put her foot down. She makes the decision to remove Donna from Rover altogether and replace her with Trip — just as soon as she gets Cameron’s signature. Donna heads home, devastated by the decision, and helps herself to a bottle of wine. She eventually decides to go for a drive, where she belts out to Pat Benatar’s “We Belong” and pays very little attention to the road. Luckily, she’s pulled over by the cops before getting herself into an accident, and Gordon is forced to retrieve her from the police station.

THE HOWE OF IT ALL |  While checking her email, Cameron comes across a link to a fan site made in her honor. It chronicles her entire career, including pictures from her time at Mutiny and information regarding the unreleased Pilgrim. She meets the webmaster (played by Last Man Standing‘s Molly Ephraim) for lunch; she turns out to be the same woman who inquired about Pilgrim at the “Future of Internet Gaming” conference in Episode 3. Oddly enough, the character’s name is not acknowledged at any point.

Upon meeting, the webmaster applauds Cameron’s work on Pilgrim, but also takes it upon herself to say that she shouldn’t be making video games. “You’re not a game builder,” she argues. “You’re a world builder.” She then tells Cameron that she’d like to work with her. The specifics of the agreement aren’t made clear, but it would seem she wants to fund Cameron’s next project — whatever it may be.

Afterwards, Cameron makes her way back out to the Airstream, where Donna soon arrives with paperwork on behalf of Rover. Cameron signs away her proprietary rights without any hesitation, but notices something is bothering Donna. She asks if everything is alright, but Donna decides to keep all of her frustrations bottled up. After she leaves, an MCI tech arrives to wire the Airstream for Internet use. As the episode draws to a close, Cameron boots up her computer and gets to work. The sound of the dial-up tone has her grinning from ear to ear.

What did you think of this week’s Halt and Catch Fire? Drop a comment below.