Midway through Saturday’s Halt and Catch Fire, Joe confesses to Gordon that he’s not quite sure what problem he’s trying to solve anymore. He’s always been able to see the future, but now he’s at an impasse.

What begins as a discussion about adding a search bar to the Comet interface morphs into a moment of self-reflection. Joe isn’t just referring to the work at hand, but also a myriad of overwhelming situations: He’s contemplating his oft-contentious partnership with Gordon, and the three years he spent holed up in CalNect’s basement trying to get Lone Star off the ground. Whether he knows it or not, he’s also describing his relationship with Cameron, which seems to have everything working against it in “Nowhere Man.” Little does he know that his problems with Cameron hinge on a secret that will come to affect each and every one of our principal characters. 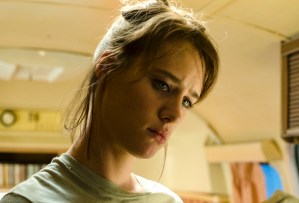 Cameron picks a fight with Joe at the top of the episode. Riddled with guilt for secretly fixing Rover’s algorithm, she refuses to come in and help Joe and Gordon figure out a way forward for Comet. She then returns to the Airstream. The next morning, Tom shows up unexpectedly with divorce papers in hand. He reveals to Cameron that the woman he left her for is now pregnant with their first child. Before he leaves, she gives him a hug and apologizes for everything that she’s done.

Later, Cameron returns to Joe’s apartment while he’s still at work. Bosworth comes a-knockin’, and he’s freaking out about Rover. Donna knows Cecil couldn’t have made the necessary fixes, and Bosworth knows the jig is almost up. He pleads with Cameron to meet with Cecil and walk him through the algorithm so they don’t get caught in a lie, but she refuses. He then heads off to dinner with Diane and Donna, during which Donna confronts him during a moment alone. After a volatile exchange of words, Bosworth makes a beeline for the nearest exit, but is interrupted when a sharp pain in his chest causes him to fall to the floor.

At the hospital, a doctor comes out to the waiting room and informs Diane that Bosworth is going to pull through. Cameron arrives soon after, afraid that her refusal to further help Bosworth triggered his heart attack. She tells Donna that they had a fight, but when Donna inquires about the reason behind it, she is met with silence. It’s then that Donna connects the dots and realizes that Cameron fixed the algorithm. Joe walks in before things manage to get heated, but when he heads back to check on Diane and Bosworth, Donna tells Cameron to stay out of her business and out of her life.

On the car ride back from the hospital, Cameron asks Joe to pull over. She confesses to him that she saw Tom earlier that day, and that the reason she told her ex about the affair is because she wanted him to leave. She then reveals to Joe that she helped out with Rover as a favor to Bosworth. Fearing the worst, he asks Cameron why she’s telling him all of this, to which she responds, “Because I love you.” The scene cuts to black before Joe has a chance to respond. 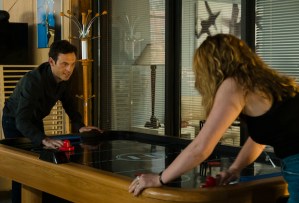 While everyone else is having a bad few days, things are looking up for Gordon. He and Katie are officially dating, and things appear to be going well. Best of all, Joanie seem to like her, which is no small feat. (You all remember how she treated the last woman her dad brought home, yes?) Haley also likes Katie, but is clearly upset when Joe blurts out at work that her father is sleeping with the new hire. She later rejects an offer to listen to music with Katie and Joanie.

Gordon’s health is also addressed in a big way, having pretty much gone unmentioned for the first half of the season. Katie is aware that he has a neurological condition, and that he jots down his pain levels in a notepad. He subsequently makes her aware of a new method he’s using to cope with the pain: He records himself speaking, then plays it back to drown out the sounds around him.

Later that night, Gordon is woken up by a phone call. It’s Donna. They discuss how well Haley’s been doing ever since she started working at Comet, then Donna confesses her guilt about Bosworth. Gordon assures her that Bosworth’s heart attack was not her fault, but a result of the stress he caused himself. After they hang up, we cut to Haley, who gets into the bed, puts on her headphones and blasts PJ Harvey’s “Rid of Me.” The song acts as a soundtrack to the closing minutes of the episode. Donna sits down at the computer and plays Pilgrim, seemingly in awe of Cameron’s creation. Gordon, meanwhile, takes an entire drawer of notepads and unloads them into his fireplace. He smiles as he watches them burn, then walks away.

What did you think of Halt and Catch Fire Season 4, Episode 5? Drop a comment below.