In the second episode of Halt and Catch Fire‘s final season, “Signal to Noise,” Joe attempts to catch Cameron up on everything she missed while in Tokyo — and everything the show missed when it quickly made the leap to 1994.

“Did you know Bill Clinton is the president?” Joe asks, before blazing through what is essentially a half-decade’s worth of headlines. “The Cowboys won the Super Bowl. Audrey Hepburn died and so did River Phoenix. Some crazies tried to blow up the World Trade Center. You can be gay in the military but no one can ask you about it, and you can’t tell anybody. And did you know IBM lost $5 billion?”

Arguably, though, the best ’90s reference is saved for last, when another scene picks up midway through a debate on the logistics of The Fresh Prince of Bel-Air:

CAMERON | So, he’s from Philadelphia?
JOE | West Philly, yeah. But his mom is really freaked out about what happened on the basketball court, so she packed up his stuff and moved him to Los Angeles, and he’s been living there ever since.
CAMERON | I’m sorry, but was the thing on the basketball court really that big a deal? I mean, to send your kid away forever?
JOE | I think it involved gangs.
CAMERON | Oh! And he’s not actually royalty?
JOE | No, Fresh Prince refers to his street cred.

Creators Christopher Cantwell and Christopher C. Rogers credit the Fresh Prince nod to supervising producer Mark Lafferty, who wrote the episode. Nevertheless, they’re jazzed (see what we did there?) about bringing the once-1980s-set tech drama into the decade that influenced so much of their upbringing.

“It was a great life to live in the ’90s, I will say,” Rogers tells TVLine. “We’re both children of the ’80s, Cantwell and I, so in a lot of ways, I think we had our pop culture maturity in the ’90s. Getting here feels like a certain kind of home, whether it be the music or the video games, and certainly the TV.

“In Episode 2, we begin what I’d like to think is a nice round of ’90s references,” he says, “but you know, just like with the ’80s stuff, we don’t want to treat it like a punchline. I think we try to be selective when we can, but there’s a lot more nostalgia now, just because it’s stuff we lived.”

That includes the music, the clothes, and yes, the hair. Case in point: Joe’s lengthier ‘do. 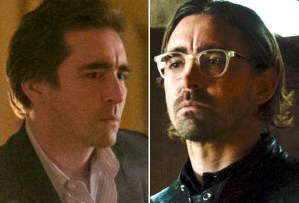 “[Lee Pace] pulled that f—king haircut off,” Rogers says with a laugh. “It just makes me so mad. Everyone [back then] looked so stupid!”

As for how Joe, who is supposed to be in his mid-40s, somehow looks more youthful now than he did when the show started? “He’s a werewolf,” Rogers reveals, potentially ruining a Season 4 twist. (Not really).

What did you think of all the ’90s references in the Halt and Catch Fire premiere? Grade the back-to-back episodes via our poll, then chime in below.