Question: Scoop on Episode 300 of Grey’s Anatomy? —@ThePompeoMethod via Twitter
Ausiello: With It breaking box office records, I’m hearing rumblings that the Krista Vernoff-penned outing — which bears the Hamilton-esque title “Who Dies, Who Lives, Who Tells Your Story” — may feature a frightening, possibly dangerous clown.

Question: Will Sean Maguire be coming back to Once Upon a Time? —Sara
Ausiello: “Never say never, but… not in the immediate run of episodes,” Adam Horowitz told us when we delivered your question. Co-creator Eddy Kitsis added, “We love Sean and we love that character — and Robin Hood is obviously still out there,” presumably engaged to Regina’s other half. So while Season 7 features “Evil Queen Prime” (as some dub the original), “that is not to say that Sean may not pop up at some point.” 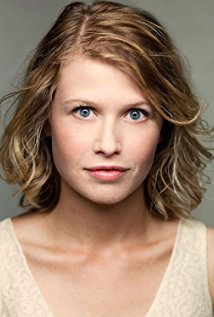 Question: Is there any scoop you can share about Once Upon a Time‘s new Alice? —Rebecca
Ausiello: Fresh from screening the Season 7 premiere, Matt Mitovich reports that although English actress Rose Reynolds (Poldark) is the lesser known of the several new additions, she definitely “pops” and gives Alice a fun, mischievous streak. Just do not pigeonhole this Alice as being “from Wonderland”! (She gets testy.)

Question: I’m dying to know — does Maggie say yes to Alex’s proposal on Supergirl?! —Kevin
Ausiello: I’m not going to completely ruin the surprise for you, Kevin, but I will say that the CW drama is casting a reverend to preside over a “ceremony” in Episode 308. Looking for more proof? The network’s official description for the show’s Oct. 9 premiere involves Alex and Maggie discussing their “impending nuptials.” So… you do the math. (ETA: Or, in light of today’s breaking news, it could be this wedding the clergyman oversees.)

Question: Anything on the Teen Wolf finale? Will we see Allison one more time? -Jake
Ausiello: I’ve got good news and bad news, Jake. While we don’t see Crystal Reed in Sunday’s series finale (that’s the bad news), her character does factor in to a pretty pivotal moment for Scott in his final battle. And that’s all I’ll say.

Question: Any special celeb guest stars popping up on Last Man on Earth this season? —Tim
Ausiello: There’s actually a super-fun cameo in the show’s Season 4 premiere on Oct. 1.

Question: Any word on season 2 for Midnight, Texas? —@alaskancelt via Twitter 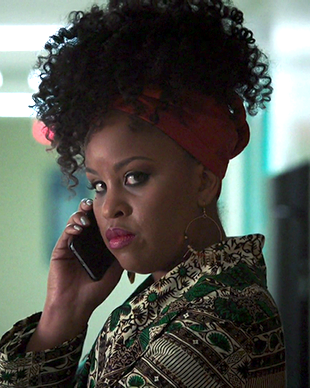 Ausiello: No official word, but my gut is erring on the side of renewal. Speaking of which…

Question: I’m already missing Midnight, Texas. Got any scoop for me? —Nguyet
Ausiello: Executive producer Monica Owusu-Breen says that if the supernatural drama returns for a second season, Olivia will be at the center of the action the way Manfred and Fiji were in Season 1. Oh, and if you took note of Madonna’s call at the end of the finale, you’re ahead of the game. “Madonna, and her connection to Olivia’s father? There’s so much there, I can’t wait to dive into it,” Owusu-Breen says.

Question: I’ve enjoyed all the scoop on my favorite shows all summer long, but two shows that consistently are never talked about are Blindspot and Madam Secretary! Please, any kind of scoop regarding what to expect in the upcoming seasons! Something juicy please! —Laura
Ausiello: How about Madam Secretary? It looks like we’re about to meet Blake’s folks: The show is casting Fred and Edie, the rich and snooty parents of Elizabeth’s right-hand man. When they show up, Mr. and Mrs. Moran are desperate to talk their son out of a life of public service… and into the private sector, where he can rake in the bills. The parts are recurring, too, so expect Mom and Dad to be around for a while. (Laura: I think you’ll like the next Q/A as well…) 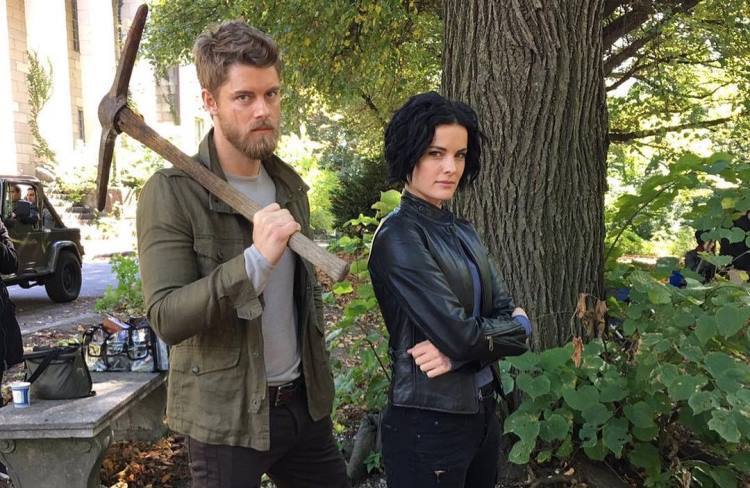 Question: Would love something about Roman’s involvement in Season 3 of Blindspot, please? —Susan
Ausiello: Series creator Martin Gero is neither confirming nor denying that Roman had something to do with Jane’s tattoos lighting up in the Season 2 finale. Just kidding — he’s confirming it! “It would be fair to guess that Roman is behind it,” says the EP, before adding, “but it’s not about Sandstorm. It’s not about taking over the American government. It’s a whole new thing now.” Gero goes on to remind us that Roman’s portrayer, Luke Mitchell, “is a series regular this year. He’s in every episode. He’s our main bad guy, and first and foremost, he’s really hurt. Jane is the closest person to him in the world, and she chose Weller and the FBI over him. He’s been hurting about that. This isn’t the only reason for the tattoos, but there’s certainly a punitive part of the tattoos where he’s trying to imprison Jane by them in many ways.”

Question: Any scoops about Betty and Jughead from Riverdale? — Marie
Ausiello: Brace yourself, “Bughead” fans: Riverdale‘s most adorable couple will face “issues of long distance” in Season 2 following Jughead’s move to a new school in the finale, executive producer Roberto Aguirre-Sacasa warns. Plus, “Jughead is starting to explore the Southside Serpents subculture, and the world that his father was a part of. That sort of starts to draw him away from Betty.” But before you lose all hope, Aguirre-Sacasa reassures us: “It’s almost like every force in the universe is out to pry ‘Bughead’ apart, but ‘Bughead’ is pretty strong, I’ll tell you that much.”

Question: Please tell me Famke Janssen is returning to How to Get Away With Murder this season. —Misty
Ausiello: Series creator Pete Nowalk would if he could but, at this exact moment, he can’t. “I love Famke so much, and I love Eve and Annalise together,” raves the EP. “I hope we will see her again. We don’t have specific plans for that, but you never know. Any character that has affected Annalise in such an important way, like Eve — we like to make it feel real and like they’re still in each other’s lives. That is my hope.” On the topic of Annalise, Nowalk says when Season 4 opens “she’s really at the bottom. Career-wise, she’s at the lowest she’s been probably ever. It’s really fun to watch her build her career back up and do that step by step. That’s her journey this season. She’s a phoenix rising from the ashes. It’s been really delicious to write, and it’s going to be really delicious to watch Viola act this great, long journey of redemption.”

Question: What scoop can you give on the new season of Supernatural? —@TheatreGirl7299 via Twitter
Ausiello: When Loretta Devine’s psychic Missouri Moseley returns in Episode 3, we’ll find out “the reasons why we haven’t seen her in a few years,” executive producer Andrew Dabb tells TVLine. Plus, the Season 1 character is “one of the few people still around who can comment on what Sam and Dean were like versus what they are like [now]. The last time she saw Sam and Dean, Sam was just out of college, and Dean was struggling with being his own man, still kind of in his dad’s shadow. They are not those guys anymore.”

Question: Will you pretty please give me a Suits spoiler? —Rowan
Ausiello: Although Jessica hasn’t mentioned him recently, she and boyfriend Jeff Malone are going strong, executive producer Aaron Korsh assures us. “Some of it is we just haven’t visited her in Chicago and spent time with her in Chicago,” he explains. “In our minds, they’re still together, and we’re still formulating how that’s going to work in the spinoff. D.B. Woodside is a series regular on [Lucifer], so it’s not like we have 100 percent access to him. So we’re still trying to figure out what to do about that in terms of the spinoff.” Speaking off the in-the-works, Jessica-led offshoot, the disbarred lawyer will take on a surprising new job in the backdoor pilot for the potential series.

Question: What does The Thinker (The 100‘s Neil Sandilands) want with Team Flash on The Flash? —Abby
Ausiello: The Big Bad is motivated by something personal that he experienced” rather than a desire for world domination, per showrunner Todd Helbing, who adds that there’s a “psychological component” to Season 4 (premiering Tuesday, Oct. 10). The Thinker “literally is the smartest guy on the planet, so there’s a lot of chess pieces that he’s moving around simultaneously. As our team is figuring out who he is and what they think the plan is, there’s a lot of fun [as we] show the audience information and then have our team catch up to that information or surpass it. It’s a big mystery.”

This AAnd That…
♦ Blind Item! A popular-ish couple on a popular-ish NBC drama series is getting hitched this season.
♦ Law & Order: SVU‘s upcoming Season 19 will include a high school bullying episode that is “our answer to 13 Reasons Why,” showrunner Michael Chernuchin says.
♦ Casting scoop! Everwood vet Gregory Smith is set to guest-star on Designated Survivor as Will Griffin, a sweet-faced lieutenant on the U.S.S. Verona, which becomes stranded in the Persian Gulf after hitting a garbage scow off the coast of (the fictional) Kunami, thus inciting an international incident.
♦ I’ve seen the first two Will & Grace revival episodes and I wholeheartedly agree with Charlie Mason’s rave review. Here are three other new shows I’m recommending for fall, along with one I’m urging you to steer clear of.