It’s summertime on Fuller House‘s third season, and the livin’ is… complicated.

Arriving Friday on Netflix, the first nine episodes of Season 3 pack a handful of surprises for the housemates, including some much-needed resolution for star-crossed lovers D.J. and Steve.

“That’s a big arc for us this year,” series creator Jeff Franklin tells TVLine of the lingering tension between Steve (currently engaged to C.J.) and D.J. (currently dating Matt). “We get back into Steve and D.J.’s feelings for each other this season. We wanted to throw some obstacles in their way, which we’ve done. We also told the audience at the end of Season 2 that D.J. was originally going to choose Steve over Matt, but circumstances didn’t allow that to happen. We know where D.J.’s heart is, but Steve doesn’t. And I don’t think D.J. is fully aware of how Steve may or may not be feeling. That big, messy situation will get resolved in the two halves of the season.”

It all leads up to a “crazy episode” in Japan, which is where the second half of Season 3 will pick up when it premieres, likely in December.

Speaking of surprises, D.J. will find herself facing off against Gia on several occasions (“They’re a lot of fun as frenemies, so I’m not in a hurry to make them friends,” Franklin says), and viewers will get another Girl Talk reunion. Additionally, Gia’s daughter Rocki (played by Disney Channel star Landry Bender) will prove to be a “bad influence on the older kids, much like Gia was a bad influence on Stephanie growing up.” 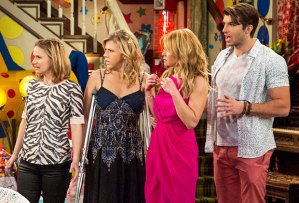 On a lighter note, Kimmy is playing around with a new catchphrase this season (“Sweet cheese!”), which Franklin says “just seemed fun, so we kept doing it. There are no real rules.” Season 3 will also finally take viewers inside the oft-mentioned — but never seen — Gibbler house.

“I don’t think we ever gave [Kimmy’s parents] actual professions, though we alluded to all sorts of crazy careers and hobbies,” Franklin says. “All of the Gibblers turned out pretty strange, so we started with the idea that it would be a funhouse. We actually ran out of room on set with all of the things we wanted to do.”

“We thought about it,” he admits. “But such a big part of the appeal of this show is the comfort-food aspect. It feels like a different show, but the same show, and the house is a big part of that. That couch is the ultimate symbol of the old show, so I kind of like it there. I don’t have any plans at the moment to enlarge it.”

Your hopes for Season 3? Drop ’em in a comment below.