“Stop the Anuk-Ite, stop the war” may not roll off the tongue as easily as Heroes‘ “Save the cheerleader, save the world,” but with only a few episodes left in Teen Wolf‘s run, who am I to nitpick?

Sunday’s (first) episode revealed that Liam’s biology teacher Ms. Finch — for the record, I knew she was trouble when she walked in — is also a werewolf, and the Anuk-Ite has taken the form of her daughter. (You know, after it murdered her, along with the rest of Ms. Finch’s pack.)

The plot thickened when Ms. Finch’s daughter was identified as Quinn — yes, that Quinn! — who then fought her way through Beacon Hills High to merge with her “other face,” previously confirmed to be Aaron. And what a merging it was! The big event began with Quinn and Aaron making out, while a whole mess of bugs traveled between their mouths, then ended with Aaron snapping Quinn’s neck and fully transforming into Marvel’s Red Skull. I mean… the Anuk-Ite.

I had a feeling this transformation was coming after Lydia and Malia tapped into Halwyn’s mind for the scoop on Beacon Hills’ newest Big Bad — which was no simple task, mind you. Not only did Malia have to constrict the flow of blood and oxygen to Lydia’s brain, forcing her into an unconscious state, but the ladies then had to operate an MRI machine to pull the bullet out of Halwyn’s skull. Sadly, Halwyn was only alive (again) long enough to warn the pack not to look the Anuk-Ite in the eye; the silver from the bullet quickly melted and poisoned him. 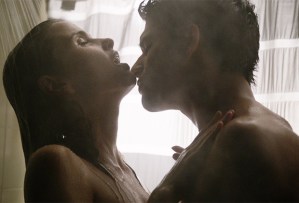 And what better way to celebrate the birth of a terrifying new enemy than with a little shower sex? Scott and Malia certainly know what’s up.

* I’m obviously not thrilled that Gerard is teaming up with the Anuk-Ite to take down Scott’s pack, but it was nice to see Grandpappy Argent shakin’ in his boots for once. That faceless (or is it two-faced?) creature is not messing around.

* Am I the only one who half-expected Theo and Mason to start making out? There was some chemistry brewing in those tunnels, let me tell you.

I’ll have a recap of this week’s second episode — the second-to-last one ever! — posted later tonight. For now, drop a comment with your thoughts on this first installment below: Do you fear the Anuk-Ite? And have you accepted Scott and Malia as a couple yet?