Leave it to Stephen Colbert to Spicer things up. 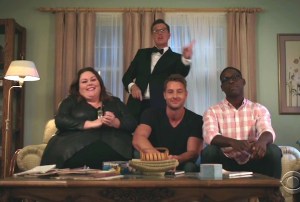 The bit came after Colbert — aided by several of TV biggest stars — sang and danced his way through several hit series, all the while singing that life was so much better on television. Colbert pranced through the likes of This Is Us, Veep, The Americans and Stranger Things before tossing to Chance the Rapper for a quick solo.

After the musical ended — with Colbert in the middle of a Handmaid’s Tale kick line — the first-time Emmys emcee kicked off the live broadcast from Los Angeles’ Microsoft Theater with a politically driven monologue.

The details on Spicer’s piece: When Colbert mused about how big the crowd in the auditorium was… then said, “Sean, do you know?” Then out rolled Spicer on a giant podium, saying, “This will be the largest audience to witness an Emmys, period! Both in person and around the world.”

“Melissa McCarthy, everybody! Give it up!” Colbert said, as the real McCarthy looked on from the audience.

Video of the Emmys opening will be added as soon as it’s available. In the meantime, grade Colbert’s monologue via the poll below, then hit the comments!