Anybody else have the Golden Girls theme song stuck in their head after seeing Strand’s unique way of saying to Madison, “Thank you for being a friend,” in Sunday’s Fear the Walking Dead? Just me? Huh. Maybe you’re still trying to bleach from your brain images from what was arguably the grossest scene in the AMC drama’s history. Or maybe you’re replaying in your mind’s eye these other, less gag-inducing twists of plot. Read on for all the, er, gory details.

‘HOPE SPRINGS FROM DARKNESS’ | Early on in “La Serpiente,” Strand directed Madison and Walker to what appeared to be a gated mountainside parking lot, in which — stay with me — there was an old VW Bug, under which — still with me? — there was a manhole whose tunnels — we’re almost there, I swear — led alternately to the bazaar and the dam. Whew. Though the latter was their destination, Walker was reluctant to follow the leader, especially after Victor warned that, at first, “the smell’s a bitch-slap.” But the stench turned out to be the least of their problems down below: Strand was about as sure of the route to the dam as I am to anyplace without GPS. (Really, is there anything you want to hear less from your guide as you’re playing dodge-a-rat and trudging through puddles of excrement than “I think it’s this way”?)

Mind you, Strand also might have been exaggerating his confusion since, as soon as he’d told Madison about Daniel’s resurrection and their last encounter, and she’d told him it was no biggie, because Ofelia was alive, he “miraculously” found the open-eye symbol that told him which way to go. Unfortunately, the way was through a s—-lined smaller tunnel on their hands and knees. That, you might have guessed, would be as grody as the episode got. But no — stuck in the tunnel was a zombified Fat Bastard from Austin Powers. After beaning the walker, Madison said that they had no choice but to remove the obstacle from their path. “What do you mean remove it?” Walker asked. In response, she began hacking Fat Bastard to bits, passing pieces of him backwards in the tunnel until finally they made it past. 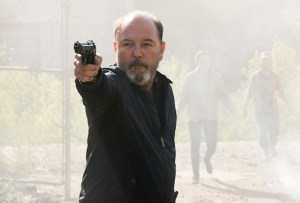 ‘SOMETIMES A LEADER HAS TO SHOW FORCE TO GAIN RESPECT’ | Above ground, Daniel, returning from another disastrous water delivery with Efrain and Everardo, bickered with the pre-apocalyptic priest about who’d started the violence. Maybe Daniel had shot first, he said, but only to gain control of the situation — the thirsty were beginning to riot. Shortly, he discovered Strand, Madison and Walker emerging from the sewer tunnel, and would have readily put a bullet in Victor’s head, had Maddie not stopped him by quickly revealing that not only was Ofelia alive, she was living at a ranch that was in desperate need of water. So, uh, a little help? Off those reunions, Madison was allowed to plead her case to Lola, who insisted that they had no water to spare. “You have a lake,” noted Madison, admirably leaving the word “bitch” off the end of her sentence. But in spite of the regular attacks on the water trucks — and the likelihood of those attacks eventually following the trucks back to the dam — Lola wouldn’t budge.

That night, while Daniel assured Lola that he wouldn’t be leaving her defenseless by going back to the ranch to see Ofelia — “She thinks I’m dead… Maybe it’s for the best” — Walker was grumpily explaining to Strand that, if Madison couldn’t make good on her agreement with him, the Nation would reclaim its land, evicting the Clarks and everyone else that the Ottos had moved in. At the same time, Madison took another stab at swaying Lola, playing up Daniel’s favorite angle about the thirsty eventually revolting. Alas, even if Lola wanted to, she couldn’t trade water for weapons with the ranch — there’d be bloodshed if she struck a deal with gringos. But, she said, Ofelia, Madison and her family could come live and work at the dam, if they so chose. 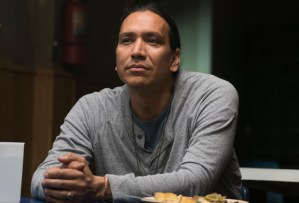 ‘A FRIENDLY FACE WILL SLIP A KNIFE IN YOUR BACK WHEN IT’S TURNED’ | Later, while Strand helped Efrain fix up an injured Everardo, he learned a) that Daniel’s nickname for him was the episode’s scaly title and b) that Daniel was always trying to convince Lola that the people were going to attack the dam, the only question was when. (Which seemed a much likelier scenario than Efrain’s preferred one: in essence, God will provide.) At that very moment, Daniel was in the cafeteria, thanking Walker for saving Ofelia in the desert. And it was probably a good thing Daniel hadn’t gone in there to eat, as he would have lost his appetite upon learning that his daughter had poisoned the militia for the Nation. “I did not raise [her] to be a soldier,” he said. Meanwhile, Strand asked Madison something she hadn’t considered since before she’d had kids, back when she was late-’80s Perm Madison: What did she want? Barring a Mustang and Cheap Trick tickets, she wanted to stay at the ranch. And what kind of future did Strand want? “One,” he said, “where I don’t fail my friends.”

The next day, off another argument with Lola about properly defending her and the dam, Daniel, guessing that Strand’s “serpent brain… is coiling around an idea,” said that if the scheme he cooked up “benefits both of us, I’ll look the other way.” And no sooner had Walker taken off for a mass slaughter/eviction at the ranch than whad’ya know? Right in front of Strand’s eyes, a water truck mysteriously blew up, knocking down a section of fence, letting in a few walkers and momentarily leaving the dam vulnerable to rioters chanting, “Down with the water queen!” Hearing that, Lola was suddenly ready to strike a deal with Madison, bloodshed be damned. Before picking up Walker with a truck full of good-faith water, Madison asked Strand how he’d rigged the explosion and, more importantly, why? “You would have done the same for me,” he said. And methinks he was right.

So, what did you think of “La Serpiente”? Has any Fear TWD scene to date been grosser than the hacking up of Fat Bastard? Are you looking forward to the “twisted” Daniel/Ofelia reunion EP Dave Erickson promised? Hit the comments.