This post contains spoilers for The Mindy Project‘s Season 6 premiere.

Mindy Lahiri thought she wanted a husband, but what she really wanted was a live-in nanny.

That’s the unfortunate takeaway from The Mindy Project‘s Season 6 premiere, which began streaming on Hulu Tuesday. The ambivalent look Mindy shot out the train window just after getting hitched in the season finale is in full effect as we catch up with Dr. L and her new hubby, who genially — if not all that passionately — merge their families at the start of the show’s final run.

As Fontana Bass’ “Rescue Me” plays in the background, we watch a montage of Mindy and Ben (and occasionally their kids) going about normal life: sharing meals, brushing teeth, sticking to their own sides of the bed. It’s clear that Mindy finds the monotony unbearable, and when even the smallest work-related drama pops up — this time, it’s Jeremy and Anna’s discussion about whether or not to co-habitate — Mindy leaps at the chance to ditch her spouse and children for something a little more fabulous. 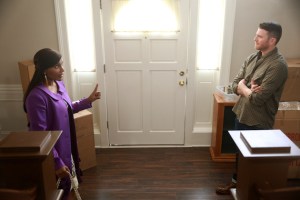 Finally, after Ben sleeps at his New Jersey house for two nights, and Mindy doesn’t notice until after the second, he confronts her about always choosing any activity with her friends over spending time with him. (“And the kids!,” I yell at my screen, because somebody’s gotta think about little Leo, right?) She apologizes, and he forgives her but makes her promise to chill with him at home the following evening.

When that time comes, Mindy texts her man that she’s dying to see him… then falls asleep on the couch in the doctors’ lounge after a late delivery. Hope you haven’t sold that house of yours, Ben, because I think you’ll likely be back there permanently real soon.

* Jody fired Karen — whom everyone loves — because she’s being mean to Colette for breaking up with her. But when the office falls apart (read: actual rats in the break room), Colette apologizes, the exes decide to be friends, and Karen is employed at Shulman & Assoc. once more.

* Tamra decides she wants to be a single mother and goes to Mindy for help getting pregnant. But when she can’t stomach injecting herself with hormones, etc., she attends a class at the clinic for help. Morgan teaches the class, ergo he finds out what’s up, and he bemoans that Tamra isn’t going to have his baby. Then he helps her with the shots.

* When Mindy learns that Anna has only had three romantic relationships in her life, Dr. L waxes poetic about all of the love mistakes she’s made in the past. Anna somehow sees that as inspirational and tells Jeremy she’s not going to move in with him because she wants a chance to make some mistakes of her own.

What did you think of the premiere? Grade the episode via the poll below, then hit the comments with your expanded thoughts!