One very important character literally comes to life in Outlander‘s Season 3 premiere, while two others blink out of existence thanks to the Battle of Culloden and its bloody, near*-merciless aftermath.

The Starz drama’s return quickly makes it clear: We’re not just treading water until Mr. and Mrs. Fraser reunite. Both Claire and Jamie’s stories are compelling on their own (though for what it’s worth, I find his a little more interesting — how can housewife ennui compete with a last-minute stay of execution?!), and having Caitriona Balfe and Sam Heughan maneuver their characters through a long, lonely time allows them to turn in performances that are much different than what we’re used to.

All in all, it’s good to have another Droughtlander behind us. Read on for the highlights of “The Battle Joined.”

UNTO THE BREACH | We enter the episode at Culloden Moor, after the fighting has finished. Dead bodies — mostly Scottish — are piled all over the place, and the men who show any signs of life get a swift bayonet through the torso, thanks to the roving Redcoats tasked with finishing them off. As the fog swirls, we see Jamie lying on top of one of those piles, not dead but also not doing so well. His lips are the exact same color as his face, which is a hue I’d call “curdled cauliflower.” He watches someone get fatally gutted a few inches from where he’s fallen, but he’s so out of it, the violence barely registers. 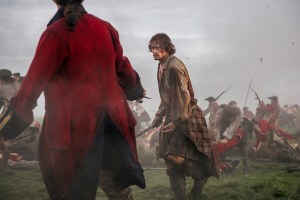 And that’s how a lot of how Jamie’s half of this episode plays out: quiet, still shots of him fading in and out of consciousness are intercut with loud, bloodthirsty flashbacks to the fighting itself and the other events of the terrible day. We see (in no particular order): Prince Charles sipping from a goblet (!) on the battlefield and getting in one last “Mark me,” as if he knew I needed a refresher on why I abhor him; Jamie sadly sniffing Claire’s arisaid, which fell to the ground as she went through the stones; Jamie urging the prince to give the order to charge the British lines “while there is still a chance;” lots of yelling and blood; and Murtagh landing next to Jamie and grinning as they both cut down Redcoats. In case you don’t quite catch what Jamie’s godfather says to him during the melee, he lets him know that he’s gotten the Lallybroch men safely turned back toward the estate, aka safety.

BLACK JACK’S LAST STAND | During the fighting, Jamie and Black Jack Randall wind up within swordslength of each other, and everything slows as the two men pause for a second and then charge at each other with all they’ve got. As the fight rages around them, Randall gets a nasty slice in across Jamie’s leg. There’s a lot of blood, but not so much that it stops Fraser from landing a good gut wound that also gushes. Eventually they’re two of the only men left standing, and they weave and stagger as they try to finish each other off. Finally, Black Jack lands on Jamie, taking them both down to the ground. It’s oddly intimate. In the present, the very pallid Jamie moves slightly and the body that’s fallen on top of him shifts: It’s Randall, who’s very much dead. It appears as though the weight of his corpse has been keeping Jamie alive by putting pressure on that thigh gash, but now it bleeds freely. 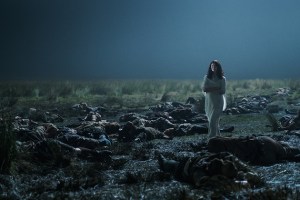 That night, as the snow starts to fall, Jamie hallucinate a nightgown-clad Claire walking among the dead and wounded, then stooping to caress his face. “Are you alive?” she asks… but when Jamie comes to a little, we realize that it’s Rupert who’s trying to rouse his friend. “Let me be,” Jamie grumbles, but Rupert ignores him and helps some men to carry him away. As they lift Fraser, the dragonfly preserved in amber that Claire gave him drops and rolls away, unnoticed.

IMPERFECT STRANGERS | Back in the 1940s, Claire and Frank have moved to Boston, and on the surface, they look like they’re moving on with their lives. But Claire is distant and weird with him, and as time passes and her belly and discontent grow, it’s so clear that — time-travel drama notwithstanding — she was not cut out to play a seen-and-not-heard homemaker. There’s a particularly infuriating scene in which she dares enter a political discussion with Frank’s boss at a faculty party and essentially is told to leave the big talk to the adults. (Side note: That Dewey-Truman conversation about Dewey only offering the voters platitudes was framed in a rather relevant manner, eh? I see what you did there, Outlander.) After the unsettling interaction, Claire tells Frank she’s fine. She isna. 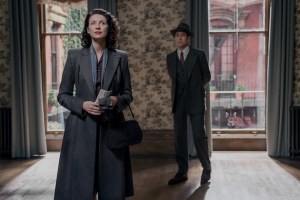 Anyway, as painful as the faculty meeting is, it’s miles more interesting than anything Mr. and Mrs. Randall come up with to talk about on their own. Given Claire’s depression and Frank’s anger/inability to know how to best help his wife, they wind up discussing tea bags for minutes at a time. TEA BAGS. And it’s done in the manner that you talk to a stranger at a coffee shop when you brush hands as you accidentally reach for the creamer, not the manner in which you address someone you once ordered to kiss your kitty in the ruins of a Scottish castle.

At least when they start fighting — she brings up her desire to become an American citizen, he calls her out on not being able to stand his touch and/or proximity — they’re being real. And things get really real when she hucks an ashtray at his head after he brings up her infidelity. She misses, Frank seems to pull himself back together, and then he points out that he didn’t force her to make the bargain with him about the baby nor to come to Boston, “And I’m not forcing you to stay.” He leaves. She cries.

BRIANNA IS BORN | Claire and Frank are still in post-fight stony silence when her water breaks and she goes into labor. After the quick horror show that was 1948-era obstetrics — the patronizing (male) doctor addresses only Frank and refuses to listen to Claire’s protests that she doesn’t want to be anesthetized during the delivery — Claire wakes up in her hospital room alone. In a sad callback to what happened with Faith, she paws at her flatter abdomen and asks in a panic whether the child died. But nope, Brianna’s just with Frank, who’s glowing with pride as he carries the infant in to meet her mother.

They kiss, and they’re both crying as they vow that this is a new start for their family. It’s a beautiful little tableau… until the nurse walks in and comments on the fact that two brunettes apparently made a flamingly ginger baby. “Beautiful little angel,” the woman notes. “Where’d she get the red hair?” Well, that was a nice 30 seconds of harmony, eh Randalls?

WE’LL MISS YOU, RUPERT | Back in the wake of Culloden, Jamie is laid out in a shed with other wounded traitors, looking prettier than anyone already having his mail forwarded to the great beyond should. Rupert is doing the best of any of them, so he speaks for everyone when the British eventually find their hideout. Long, sad story short: All of the men are Scottish and fought in the rebellion, which is treason in the eyes of the Crown. And so they’ll all be shot for their crimes.

In the hour they’re given to get themselves together, we learn that no one knows what happened to Murtagh. Then the executions begin, and it’s terribly sad. Rupert shows true leadership as he argues for clemency on behalf of two teens, then bucks them up when that clemency is denied. Jamie and Rupert’s goodbye is also rather moving. They talk about Angus (“It will be good to see him again,” Rupert notes fondly), and then Rupert makes his peace with what Jamie’s done (“I’m no saying I forgive you for Dougal, but I’ll no go to my grave hating you for it, either”). They bid each other a final farewell, and then Rupert Thomas Alexander MacKenzie volunteers to go before the firing squad next. “I mean to set a quick pace, so try to keep up,” he chides the soldiers. Then he’s gone, and Jamie cries weakly.

WELCOME HOME? | When it’s Jamie’s turn to go, he’s more than willing… but when the commanding officer, a Lord Melton, hears James Alexander Malcolm MacKenzie Fraser utter his name, he puts a pin in things. See, Lord Melton is the older brother of John Grey, the teenager Jamie tormented — but did not kill — when he snuck into their camp last season. John feels he owes Jamie a “debt of honor” for saving his life, and when Melton jogs Jamie’s memory, the Scot is sanguine. “Aye, he promised to kill me. But I don’t mind if you do it for him,” Fraser says. There’s a whole lot more back and forth about what to do, and throughout it all, Jamie is like, “PLEASE JUST KILL ME THANK YE VERRA MUCH,” but Melton fulfills his brother’s promise and has a three-quarters-dead Jamie loaded into a cart and snuck away to Lallybroch.

Jamie’s still bleeding copiously — how is that even possible?! — by the time he arrives at his family’s estate. “Am I dead?” he asks Jenny and Ian, who are beside themselves to see him safe. “You’ve come home to Lallybroch,” Jenny says, and I have loved her a lot in the past, but I love her even more for the fact that she’s half hanging out of the cart with her tush in the air, simply because she can’t wait to get close to her brother. Jamie looks less enamored of the whole situation, but he’s having a bit of a day, no?

Now it’s your turn. Grade the premiere via the poll below, press PLAY on our quick take on the season-opener, then hit the comments with your assorted thoughts!