Insecure on Sunday ushered Issa and Molly into the Season 2 finale the same way it sent them into the premiere: at a crossroads. Off Issa’s epic argument with her ex Lawrence last week, she — and, for that matter, he — once again was left evaluating the state of their breakup. And, in the wake of the dinner party from hell, Molly not only was rethinking her relationship priorities — adios, Dro; hello, Quentin? — she was contemplating the career dilemma that landed in her lap, too. Did the besties resolve their issues with, as the episode’s title suggested they would, “Hella Perspective”? Or was “Hella Perspective” what they still needed? Read on, and after all is revealed, you can grade the episode in the poll below. 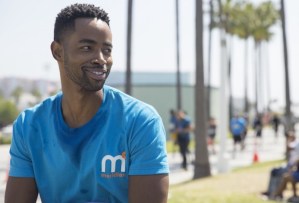 ‘I DON’T HAVE S—, I JUST DON’T LIKE LIARS’ | As the plus-size installment began, Issa, fresh from her home-redecorating project, realized why her rent was being raised — her neighborhood was being Pinkberry’d right out of her price range. Meanwhile, Lawrence spotted Issa and Molly while he, Aparna and their work colleagues were halfway through a marathon. But it appeared that he and his new squeeze were getting along swimmingly. She perhaps wisely suggested that, rather than start another app of his own, he jump in on Saddle, a project already underway.

At dinner with Aparna, Lawrence caught a glimpse of Molly. Was fate trying to remind him of his unfinished business — or how poorly he’d finished his business? Later, hanging with his boys, Lawrence revealed how uncomfortable he was with Aparna working with her ex. That’s “just extra d—k around for no reason,” said Chad, advising Lawrence to shut it down. When he did — just as Issa phoned him — it went so badly that Aparna had him let her out of the car right then and there. She wouldn’t be putting up with that kinda jealous/paranoid nonsense. 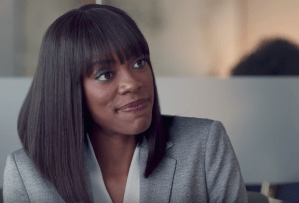 ‘FOLLOW THE MONEY’ | Flashing back to the day of the marathon, we were shown Molly’s perspective, as she insisted to Issa she was keeping it casual with Quentin. “I like him,” she said, “but he’s not my type.” Celebrating another successful job interview with Mr. Not Her Type, she placed him squarely in the friend zone when he made his interest beyond clear. But, off another therapy session — yep, Molly went back to therapy — she had sex with him while working late. Weighing her career options during a girls night with Kelli and Issa, Molly was torn between, as Kelli put it, staying with the whites or going with the blacks. Catching wind of her interviews, her firm gave her the Rising Star Award, which was more like a pat on the head than the raise or promotion she deserved.

‘YOU’RE BEING DUMB EXTRA RIGHT NOW’ | Flashing back to race day yet again, we learned that Tiffany is pregnant, Kelli ran nine miles before being sidelined by her period, and Issa… she was moving, she announced. At work, Issa confessed to boss Joanne that she was having We Got Y’all sessions at the office with the Latino students that VP Gaines was shortchanging. Unfortunately, Joanne was… let’s go with displeased to hear that Issa was holding what amounted to segregated sessions.

While Kelli and Molly were helping Issa pack, she suggested that she could still afford to live by herself if she got a second job or sold some stuff… or, er, all her stuff. Later, Joanne promoted Frieda over Issa to Director of Student Outreach. At Issa’s yard sale, she found that she couldn’t part with her and Lawrence’s old sofa, and called to let him know when she’d be out so he could pick up the last of his things. Turned out, she’d be moving in with Ahmal. 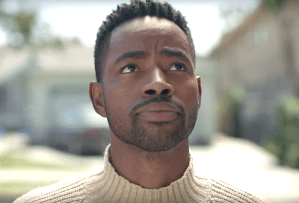 ‘I’M SORRY FOR NOT BEING WHO YOU EXPECTED ME TO BE’ | When Issa went to do a final walk-through at her soon-to-be-former apartment, she found Lawrence there. Surprised that he’d waited around till she arrived, having been given a way to dodge her, he admitted that he hadn’t liked the way they’d ended things. “And,” he added, “I just feel like I’m f—ing everything up right now.” He’d come to the right place, then, she said. Taking their conversation to the empty kitchen, he apologized for shutting down on her when he’d failed to meet his expectations for himself.

In turn, Issa confessed that, at some point, she’d started expecting Lawrence to be better for both of them, and she didn’t even know how to be better for herself. Fighting back tears, she wished aloud that she could make him believe that her cheating on him hadn’t been about him — and, she added, she still loved him so much. He loved her, too, he replied. They embraced, and… dang. He headed out. Wait, what?!? He only made it as far as the doorway before he got down on one knee and proposed.

Next, we flashed-forward to Issa and Lawrence newly married, Issa pregnant, the two of them with their adorable baby, and… oh, crap. It was a fake-out! A total fake-out! When Lawrence had started heading out, he’d actually finished heading out, and that was that. (How did I fall for that?) Finally, as the episode drew to a close, Issa and Molly enjoyed what looked like a fantastic night of Moroccan food (and fashions). The morning after, Lawrence sent Issa a Facebook friend request — that’s something, at least — Molly got dolled up in lingerie for… Dro?!? and Issa showed up on Daniel’s doorstep, saying she was sleeping on the couch. Whaaat?

So, Malibu — what did you think of the Season 2 finale? How cruel was that fake-out proposal? Grade the episode in the poll below, then hit the comments.