Ready to get freaked out by technology again? Good, because Black Mirror is back — and still scary as all hell.

Netflix’s bone-chilling sci-fi anthology is returning for a fourth season, and we have the first details on the six new episodes, along with a trailer that offers us lightning-quick glimpses of the horrors to come… including what looks like a Star Trek parody? (Between this, Star Trek: Discovery and The Orville, outer space is getting mighty crowded these days.) 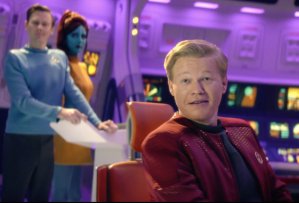 No plot specifics have been released yet, but Season 4’s other episodes include:

Five of Season 4’s six episodes are written by series creator Charlie Brooker, with “USS Callister” co-written by Brooker and William Bridges (who co-wrote Season 3’s “Shut Up and Dance”).

So when can you get your next Black Mirror fix? Netflix will only say that Season 4 is “coming soon.”

Press PLAY on the trailer above for a sneak peek at Black Mirror Season 4, then drop your first impressions in a comment below.