Love is in the fresh air for The Fosters‘ Callie and Aaron when they go on a nature trip and find themselves growing even closer during this Tuesday’s episode (Freeform, 8/7c).

“They reach a new level of comfort being alone together on this hike, and seeing these beautiful things,” previews Elliot Fletcher, who plays Callie’s boyfriend. “They have maybe an awakening together.” 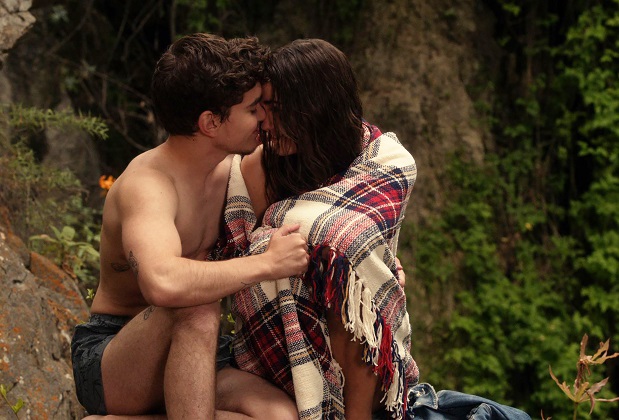 The outdoor excursion and accompanying soul-baring conversation is something new for Callie, who has never had a “partner [who] wants to hear the things she has to say, and wants to take how she feels into account,” Fletcher says. “Aaron asks her all these questions that I don’t think she’s ever been asked before, because he genuinely wants to know the answer to make her more comfortable. She acknowledges that in Aaron. She sees how much he does try to make her feel like she can be authentically herself around him. And I think Aaron feels the same [way] about Callie, because Callie doesn’t treat him any differently than he should be treated” as a “guy who just happens to be trans.”

But you may have noticed that the pair has yet to say three very important words to each other: “I love you.” For his part, Fletcher has “no doubt” that “Aaron really loves Callie.” So what’s the hold-up?

“They’re still kind of getting to know every aspect of one another,” the actor offers. “Maybe they’re both kind of cautious because she did get out of a relationship [recently], and this is new for her, being in a relationship with a trans guy, even though it is… just like any other normal relationship. So they’re still learning about small aspects of each other, and that’s maybe why” they have yet to utter those special words.

Fosters fans, hit the comments with your thoughts on Callie and Aaron’s romance.