Like the young women at the center of its story, Freeform’s women’s-mag drama The Bold Type is about much more than meets the eye.

“I think we do get a little underestimated,” executive producer Sarah Watson, a vet of Parenthood, tells TVLine. “I think people just thought [the show] was going to be a little less substantive… [and] trite, and so that’s probably been the biggest misconception. People thought it might be preachy because, obviously, we have these empowered female characters.”

Instead, the feminist series (airing Tuesdays at 9/8c) has given viewers at least five very good reasons to tune in: 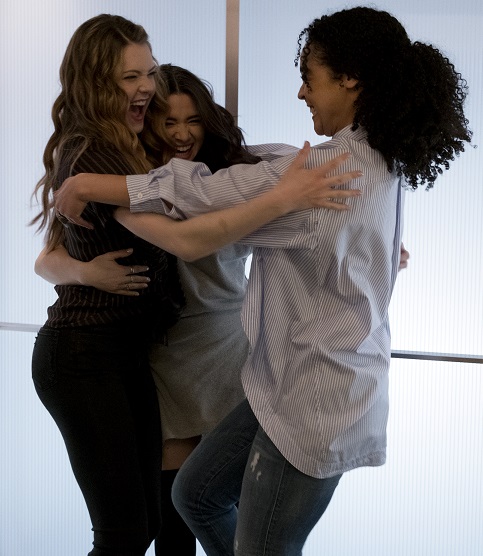 GIRLS ARE A GIRL’S BEST FRIEND | The supportive friendship between the central trio — newly promoted writer Jane (Faking It‘s Katie Stevens), free-spirited social media boss Kat (Chasing Life‘s Aisha Dee) and determined fashion assistant Sutton (Political Animals‘ Meghann Fahy) — is “the heart and soul of the show,” Watson says. (After all, it doesn’t get much more supportive than Kat trying to get a stuck Yoni egg out of BFF Jane’s vagina.) “The inclination with any group of friends, but probably particularly with women, is that the drama should come from them turning on each other and backstabbing each other, and that’s just not how life is,” Watson argues. “That’s not how my friendships are. If anyone has friendships like that, I would like to highly suggest you go get new friends, because the beauty of life is that your friends are there to face the drama with you.” So while Jane, Kat and Sutton may argue sometimes, “they are always going to have each other’s backs.” 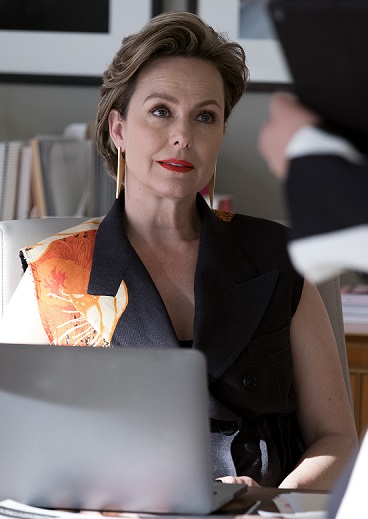 NO DEVIL IN PRADA | Just like its staffers aren’t rivals, Scarlet magazine’s editor-in-chief Jacqueline (Transparent‘s Melora Hardin) is not a clichéd dragon-lady boss. “[People] expected her to be a Miranda Priestly,” Watson notes. Instead, the EP drew on her first meeting with Hearst Magazines COO and former Cosmopolitan editor-in-chief Joanna Coles, whose life is the inspiration for the series, and the “professional respect” Coles’ employees had for her. Thus, Jacqueline takes on a “nurturing and mentoring” role in her underlings’ lives. 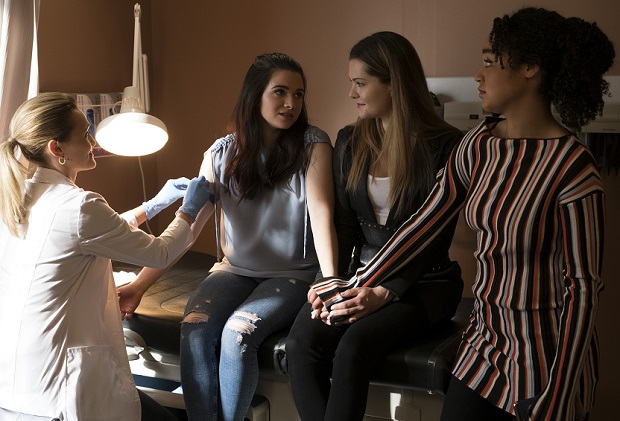 REAL WOMEN, REAL ISSUES | This Tuesday’s installment tackles the BRCA gene test debate, which hits very close to home for Jane, whose mother died at a young age from breast cancer. “I am really excited and proud of [the episode] because BRCA gene mutation testing is something that still is so new that women in their 20s haven’t really had women in their 20s before them to share their experiences,” Watson notes. Meanwhile, Kat is on a mission to free the nipple as part of a breast health awareness campaign. “Somebody [on staff] had read an article about how in New York City, anywhere a man can go topless, a woman can go topless,” Watson shares. “We just thought that was so funny and delightful.”

BOLDLY IN LOVE | Scarlet‘s ladies are all about self-empowerment, but that doesn’t mean there can’t also be time for romance. For Kat, who is questioning her sexuality after meeting lesbian artist Adena (Rogue’s Nikohl Boosheri), “we definitely want to play it real,” Watson says. “We didn’t want to get them together too quickly, because Kat is a girl who has the air of being the most confident of the three of them. But deep down, she’s actually the most insecure and probably knows herself the least.” 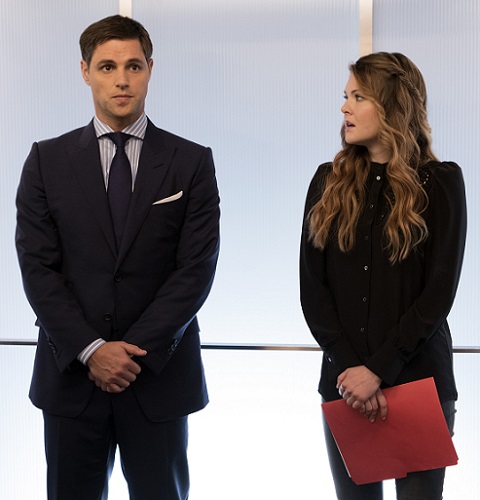 Being in a secret relationship with board member Richard (Mad Men‘s Sam Page), Sutton will “struggle [with] dating a guy you work with [who is also] in a more powerful position than you, and how that becomes complicated.”

Jane, meanwhile, is still having fun with men’s-mag writer Ryan, aka Pinstripe (Reign‘s Dan Jeannotte), “who just challenges her and knocks her off her game a little bit and drives her insane,” Watson describes. “But she’s also a girl with an idea about the kind of guy she is supposed to date… We’ll see her, in some ways, be her own worst enemy in that, and maybe jumping to some conclusions that aren’t necessarily real.”

LIKE TOTALLY YOUNGER | If The Bold Type sounds like the magazine-publishing cousin of TV Land’s book-publishing comedy Younger, well, that’s fine by Watson. “I see similarities because it’s capturing that time in your life” in your 20s, and both shows are “about strong female friendships,” she says. Plus, “Younger is a fantastic show, so if people want to compare us to that, awesome!” And Watson’s got the perfect crossover pitch: “In my dream world, Jane would want to publish a book, and Kelsey would publish it for Millennial.”

A marathon of The Bold Type‘s first five episodes airs this Tuesday, beginning at 3 pm ET, before a new installment at 9 pm ET.