Forget just about everything that happened on Showtime’s Episodes since it last aired in 2015? Read our Season 4 finale recap.

Matt LeBlanc is a man without a plan — or much hope of salvaging his post-Pucks! acting career — in the fifth and final season of Episodes.

The first episode back picks up at least a month after the events of the Season 4 finale. Matt is still hosting Merc’s madcap game show The Box, and contestants are currently in Day 37 of the competition. It’s a gigantic hit for the network, and Helen and Elliot couldn’t be happier. Merc, on the other hand, isn’t so much happy about his success as he is to see how miserable it’s making his host.

Much to LeBlanc’s chagrin, The Box is his first post-Friends success, and audiences are beginning to see him more as a game-show host, and less as a sitcom star. And while his agent is happy to see his client grace the cover of People magazine, the only recent offer that Matt has received is for Celebrity Wife Swap.

Sean and Beverly are also not too fond of their latest gig, working for the unbearable Tim on The Opposite of Us. Beverly, so put off by the very idea of being around Sean’s ex-writing partner, has a dream about suffocating Sean in his sleep just so she can take a bereavement day. He’s been keeping the writers’ room late every night for the past six weeks, and when he’s not obsessing over dreadful, Miller-Boyett-esque punchlines, he’s stuffing everyone’s faces with needless amounts of Vietnamese noodles. When Matt asks Sean and Beverly to go see Madonna, they finally build up the courage to ask Tim to cut out early. He initially agrees to the request, but then keeps everyone late again to make crêpes.

Waiting for Sean and Beverly to arrive back at The Box studio, Matt has himself one (or five) too many beers, before wandering onto the stage and playfully flirting with one of the contestants, Danika (The Royals‘ Sarah Armstrong). She’s inside her designated box, doing yoga in nothing but a tank top and panties, and entices Matt to come closer as she begins to undress. He then proceeds to fondle himself.

At this point, it should probably be noted that The Box is similar to CBS’ Big Brother, in that viewers at home can check in with each contestant via a livestream of the stage at all times. When Matt and Danika’s naughty encounter is finally noticed by someone in the control room, Merc receives a call asking what they should do. Merc, who still has it out for Matt for sleeping with Jamie all those years ago, tells the control room to keep the feed going, and to be sure to zoom in on Matt. Needless to say, the network isn’t going to be happy about this one. Merc, however, is positively giddy. 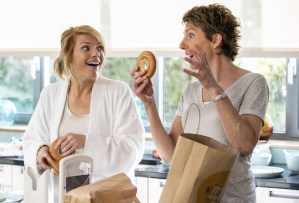 Last but not least is Carol, whom we last saw tricked into thinking she had a job lined up at The CW. Now unemployed, Carol spends her days at home, living in her bathrobe and getting high before breakfast. Beverly, being the great friend that she is, attempts to scare Carol into getting back out there and finding a new job: “You look like what I imagine you’d look like if you never left Michigan.” Ouch!

What did you think of Episodes‘ final season premiere? Was it worth the two-and-a-half year wait? Grade the episode via the following poll.