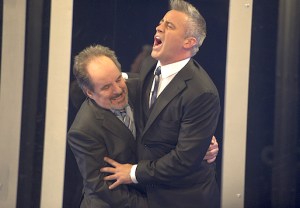 On Sunday’s fourth season finale of Episodes, Matt LeBlanc wasn’t the only one getting bamboozled!

While Myra was off groaning her way through (unplanned?) child birth, Carol suffered the wrath of a jealous Helen, inadvertently screwing up Sean and Beverly’s new show, while Matt and Merc butted heads on the set of their madcap game show pilot.

THE CRAZY ONES STRIKE BACK | While out at lunch with Helen, Carol ran into one-time network prez and erstwhile lover, Castor Sotto, who swore he was back on his meds following the breakdown that lost him his job. Though they quickly parted ways following a seemingly sincere apology for his behavior, he no sooner called his ex and offered her a job as his second-in-command at The CW, where he insisted he’d shortly be announced as its newly instated president. Fulfilled by both her personal and professional relationships with Helen, Carol initially turned him down, but following a disastrous breakup caused by Helen’s absurd certainty that Carol was sleeping with Beverly, she called Castor and took him up on his offer. Regrettably, there was no job waiting for her at the teen-oriented network, and no one there had heard of the highly imaginative Mr. Sotto. Meanwhile, a vengeful Helen was meeting with Sean and Beverly about their upcoming series, The Opposite of Us, and to punish the woman she assumed was sleeping with her ex, she reinstated Sean’s old writing partner and Beverly’s archenemy Tim as co-showrunner. (“Oh, nooooo!”)

WHAT’S IN THE BOX?! | Thinking he finally had one up on Matt, Merc played hardball with his new game show host on the set of The Box, teasing the Friends-turned-Pucks star about his weight gain and style choices. In the middle of their first taping, where Matt as host was well-received by the studio audience, he attempted to give Merc a note about a turn of phrase used towards female contestants that some might perceive as a sexual innuendo, but the only thing Merc wanted to discuss was Matt’s decision to wear an unflattering vest. The spat grew physical when the former network honcho revealed that he was to blame for the continued existence of Pucks, which in turn lost Matt his big NBC pilot. Unlike their last big fight, Matt came out the victor, locking his producer in one of the set’s glass boxes and ordering the control room to release bugs meant for the contestants upon the oafish executive’s head.

What did you think of the yet-to-be-renewed Episodes’ season finale?